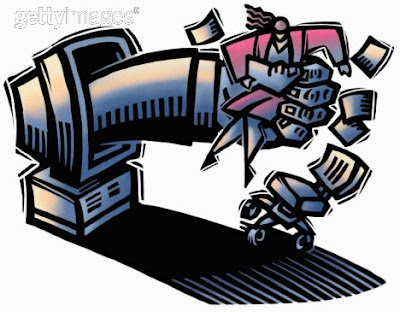 Received from my Bangsa Malaysia buddette Faridah this morning. I thought that it would be a good idea to warn readers of this:

I checked with Norton Anti-Virus, and they are gearing up for this virus!
I checked snopes.com , and it is for real!! Get this E-mail message sent
Around to your contacts ASAP. PLEASE FORWARD THIS WARNING AMONG FRIENDS, FAMILY AND CONTACTS!
You should be alert during the next few days. Do not open any message
With an attachment entitled 'POSTCARD,' regardless of who sent it to you.
It is a virus which opens A POSTCARD IMAGE, which 'burns' the whole hard
Disc C of your computer. This virus will be received from someone who has
Your e-mail address in his/her contact list. This is the reason why you
Need to send this e-mail to all your contacts. It is better to receive This message 25 times than to receive the virus and open it.

If you receive a mail called' POSTCARD,' even though sent to you by a
Friend , do not open it! Shut down your computer immediately.

This is the worst v virus announced by CNN. It has been classified by
Microsoft as the most destructive virus ever. This virus was discovered
By McAfee yesterday, and there is no repair yet for this kind of virus.
This virus simply destroys the Zero Sector of the Hard Disc, where the
Vital information is kept.

Be careful, people and thanks Farida Ibrahim.
Posted by zorro at 9:36 AM

However, even if true, if you follow the advice:
"Shut down your computer immediately."

You'll never ever get rid of the 'virus' that way.
Take a deep breath, and click Delete.

That should do the trick.

klaw: appreciate this very much.

Is this a late April Fool's joke???

We get hoaxes like these all the time. However, I have learnt to detect the fishy bits. Invariably, the first thing that raises suspicions is the way that the message is worded. It will be dramatic, the "seriousness" would be repeated several times, and some prestigious organisation/individual would be referred to as authority for the message, in this case CNN.

Like Law, I always google before taking any action. There are several websites that deal with hoaxes and these are also available when you google.

Several weeks ago, there were photos circulating in the Internet showing a child of eight being punished for stealing a loaf of bread by getting his hand crushed under a jeep. The tagline was Islamic Iranian Government Punishes Child of Eight for Stealing. I was so shocked as I have been to Iran and I have very good Iranian friends. I could not imagine them doing this to a child. When I googled, I found out that the child was part of a street circus entertainment act. That in itself is quite horrifying, but the perspective is different, it had nothing to do with Islamic punishment.

The Internet can be abused in many ways.

It was a HOAX... no need to be panic! AND PEOPLE,PLZ DO NOT FORWARD THIS MASSEGE TO ANYONE! this is how an email HOAX propagates.

If I am not wrong, this is another form of chain letter.

OK PEOPLE ITS A HOAX. It is because Nora says it. I believe him. I cant tell you why though. Our pact is safe huh, Anon from Miri.

Thanks to all who took the trouble to allay our fears. Bless you all.

its a hoax, i cforwarded e-mails to my business partners and they told me that this virus is a hoax, but thank you zorro for the heads up, anyway I would prefer the case of prevention better than cure
Subject: RE: VIRUS WARNING BEWARE OF POSTCARDS!!!!!!!

It may have been an initial threat, but the antivirus companies jump on them so quickly, it is block in hours…. And these emails go about for YEARS!!!! So please ignore and DO NOT forward