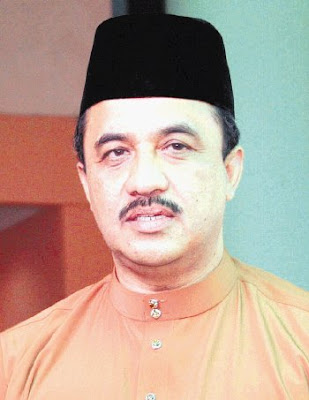 WHO calls the shots in ? The mayor of or the Federal Territories Minister?

The Federal Capital Act 1960 states that the Datuk Bandar has to report to the FT Minister who is in charge of formulating and tabling the policies in the cabinet. City Hall will then implement the policies.

If memory holds good this Federal Territories Minister post was abandoned and then revived in 2004, for reasons still unknown.

Who has the final say in matters relating to policies concerning ?

Because if it is one person (either the Minister or the Datuk Bandar, then we would not have the mess in this Federal Capital City. 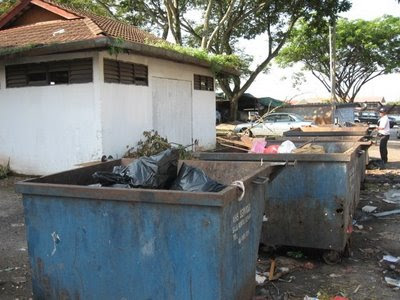 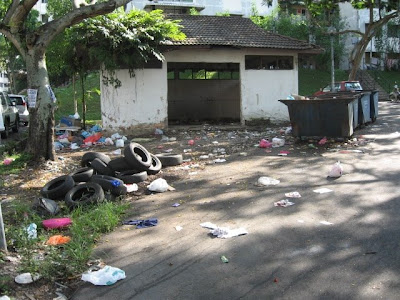 As such, this Ministerial post is relevantly irrelevant.
He is the only BN man in the Federal Capital pitted against 10 Pekatan Rakyat MPs.....and he is made a Minister. What lah, Pak Lah? It like condemning him to the slaughter house...and a Malaysiakini report has it that some UMNO divisions are already asking for his head and blaming him for the downfall of the BN in the Federal Capital. That is relevant of course. And when he goes, the deputy Minister of FT (now under a cloud of legal tangles) and the other 7 heads in the Ministry also must go. They have to unless the Datuk Bandar can absorb them under his wings and make the City Council more messy. If they can clean the mess in the FT, I am the first Chinese Prime Minister of Malaysia! 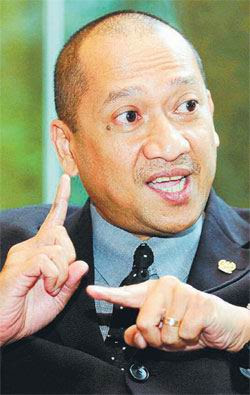 Another totally relevantly irrelevant post is that of this bloke above. He did such a loud job of being the de fuckto'......ooppps....facto Law Minister that the job was taken away from him and his current job is to see that there are no leaks in Parliament, invitations are sent out to whoever has to be invited, no more slaughter of bovines in Parliament premises, the floors are booby-trapped against possible cross-over of the hallowed floor, and that questions are fairly distributed, and he reports what goes on in Parliament to Cabinet, assuming that Cabinet Members have more pressing duties rather than attend Parliament. This last one is a real joke....like being a glorified messenger boy......THUS RELEVANTLY IRRELEVANT. But if the Chief still gives him a job, being in charge of KLIA taxis would be more appropriate, given his legal background and his past expertise in things taxis.
Posted by zorro at 10:14 PM

PM have to final say. Since all ministers report to him.

I remember they have 4 or 5 deputy ministers in the PM department, isn't it one enough? Anyway it is a job created for those umemployed or can talk one, look at the face you will know they talked crapped like my daughter's pet sugar glider.

At least it glided gracefully, ahhhh what to add some more, this is Malaysia and anything is possible.....

Zorro,
This retired captain Zul (I think he's keturunan Pakistan) was standing in the place I stay, but I never voted him but I heard that he won by the boxes of "postal votes" from the armies in MINDEF area.
Why do we need this "gullible idiot" and grab some big plot of land opposite "Carrefour" to build his "service centre"
Hope "Pak Dol" can abolish this wasteful ministry through Rakyats' hard earned money.
Anyway, I hope the PR can takeover and abolish those "wasteful" Ministries, some created "Pak Dol" to satisfy those his own hungry and craving "supporters".

The creations of all these irelevant and redundant ministries are a waste of taxpayers' money. This is political patronage, pure and simple!

Another clear case of wastage is the creation of federal committees to handle funds that are meant for developments in states held by the PR coalition. These overlapping committees are a way for the BN to repay its supporters and to deny the PR state governments of control over the disbursement of the fund.

No much attention is given to this issue by the bloggers. Can AAB do this and claim to be fair?

Ouch, no wonder problems in KL still haven't been solved. When I read Mr Wee's blog, it seems the lone ranger's final answer always goes to: I will check with DBKL. Like do'h! We can go to DBKL ourselves if that's the case.

The first chap mentioned is "One is the loneliest number". He's been put there to pacify the lions for them to eat him up. Will he last? Or will he make his stand in Putrajaya or Labuan where there are supposedly no wild animals. Or is there?

The second chappie just can't take a hint, that he should do the honourable thing, to get lost for his demotion to "office boy", "peon", "messenger" and "tea boy". Very quiet now isn't he? Well he's been defanged and wears false teeth now.

I will publish an extract of this post and link it back to your weblog from: http://mylivingwall.com