BLOGGING seems to be the prevailing vogue or flavour after the March 8 cataclysmic rampage that deprived the once omnipotent Barisan Nasional of its invincible 2/3 majority.

It is ok to change, to try new things like blogging. It is a means to an end and blogging cannot be an end in itself. This Chief Minister had the opportunity to take a swipe at the Selangor Government's approval of the new pig breeding facility. He used his first posting to get even. Tsk.....tsk.tsk....but as you will discover, he fell flat on his face. 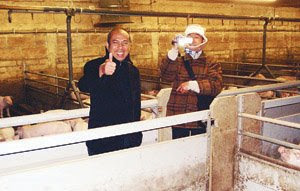 He did not do his homework until commentators reminded him that it was his buddy Khir Toyo who initiated this. He did not know that a study tour was made to and the by the then Selangor top-dogs. And he also did not know that one of those who gave the thumbs up (pic above) was a then adun of Tg. Sepat, Datuk Abdul Karim Mansor.......today he joins in condemning the project. Ali, an UMNO vice-president (??????) thought he would score capital points with this maiden posting. Let's read what happened as reported by Malaysiakini:

Malacca Chief Minister Mohd Ali Rustam has removed hundreds of comments left on his weblog after his posting on the Selangor centralised pig farm came under fire from readers.

The entry in Bahasa was entitled ‘Pig farm, a gift from the elections’ and was posted last Friday.

It prompted 365 readers to leave comments as at 3pm yesterday when Malaysiakini first visited the blog site.

Mohd Ali - who is also Umno vice-president - congratulated Selangor voters including Muslims for voting in the Pakatan Rakyat government, which decided to implement the project originally conceived by Barisan Nasional.

An overwhelming majority criticised Mohd Ali - who joined the bandwagon of bloggers this month - as ‘short-sighted’ and ‘playing up racial sentiments’.

And this why neophyte Ali bombed out......he did not know anything about screen capture copy. We all read it and it was Nat who said that "Ali Rustam got whacked left right and center, and when they couldn’t take it any more, they just deleted the comments system". Wrong escape route you took mr.minister. However, there is a way out for you according to the gutsy Politikus. She gives you this advice about the bashing you received:

"And I really, really mean bashing. The kind that actually makes me feel mildly sorry for him. And frankly, if it was me, I’d quickly apologise for writing that rather uninformed post!! You know the rational:- if a few people disagree with you, the problems is most probably them but if everybody disagrees with you, the problem is most probably you."

Thus credibility, integrity, are necessary values to possess if you want to blog. Also you must be able to take a beating like a man and dont sweep comments against you under the carpet. So if you do not have these qualities, you might as well go build that tower in Malacca. At least you can get some money out of that project......there is no kickbacks in blogging. Most of us unemployed bloggers use blogs to lie and monkey around........it can be an elite group and being one....we are wary of dishonest ones joining our ranks.

me thinks amno has just learnt; People dislike them more than they ever thot!

If THEY want to play it safe ie not be bombed -

They should stick to writing subjects on

- which they are knowledgeable ("how to steal millions and not have to go to jail"?)

but obviously NOT pig rearing !!

Zorro,
You spoke for the rest of us. This newbie blogger should learn the rope first before plunging headlong into the deep end of the pool full of hogwash. Poor bloke. What a sad first post for him.
Do you think he will dare open his comment section again?

This guy has no standard and yet he thought he is so pandai. Umno defeats not because they don't know how to blog. They lost because they are too arrogant.

Mohd Ali is the pits. He is stupid, idiotic, sycophantic, bodoh, shit. He is a bastard of the first degree. And the sad part is, he is the Chief Minister of Malacca. Believe me, he will be knocked out if ever there is going to be the next election. God help Malaysia. I pity the Barisan Nasional.
Sorry for the strong language, Zorro. I just cant help myself when we have morons like Mohd Ali.

I am no blogger. I read and follow up on much what is happening in blogosphere. However, if I am one, the CM of Malacca can join "our" ranks of bloggers, we can't stop him. Yet, I will despise one such as him within our ranks! It is like the reverse of one of the lines of the Hotel California song which says that "you can check out but you can never leave". In his case, it would be "you can check in but you can never enter".

as Ali discovered, he was alone on the pig issue. this asshole chose to shoot his mouth without getting to the bottom of it. shame on him. even more a disgrace to shut the public out from giving feedbacks. come to think of it, Md Khir took all the swipe against him like real gentleman. he is more open to criticism now. sadly unlike Khir, Ali is one ball-less prick who doesnt care what others have to say.

zorro,
Can you believe it? The joker went ahead and deleted the post already, thinking that he can erase evidence just like that.

I saved the page from the Google cache to those who want to read it but missed it (Google cache won't hold the page for long), can go to my blog to read.

Bro Zorro,
As malaccan,i'm sick & tired with this asshole.Do You know,most of the projects in malacca,even small projects like planting flowers along the roads and cleaning the clogged longkang are awarded to his cronies...this fler really 'BIG BUAYA'..i'm going to expose his secret soon..

I wish more people would know about this.

I only found out yesterday.

So, yeah. I posted it in my blog too. Needless to say, referred to your post here too.

I will publish extract of your post and link back to your weblog. Here: http://mylivingwall.com

More people should be exposed to good blog posts.