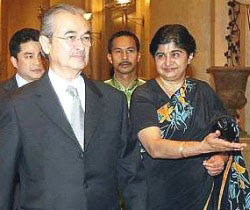 I know it is well past bedtime but we old-timers just need about 4 hours sleep to be up for what lies ahead the next day. But I dont sleep good if I dont get some doubts off my chest. Hantu, that SOB (son of a bird) who gatecrashed last night's Bar Council dinner, was of no help at all.

I have some questions that needs to be answered:

1. Was the dinner sponsored by the Government? If yes, is the executive still dictating to the judiciary?

2.Were all Bar Council Members invited?

3.Was a datukship to the president a prerequisite to the hosting of the dinner?

4. If a datukship is confered, will the president accept it?

5. Should the aggrieved parties accept compensation rather than a declared public apology?

Ambi, (datuk?) just give this old guy straight answers and he will forever hold his tongue.

Hello. This post is likeable, and your blog is very interesting, congratulations :-). I will add in my blogroll =). If possible gives a last there on my blog, it is about the TV de Plasma, I hope you enjoy. The address is http://tv-de-plasma.blogspot.com. A hug.

Answers in heavens
The cool misty breezy flow
The beautiful maidens enticing the eyes
And you can’t sleep……………….
Because of something nagging your mind

Life is like that
Sometimes you think you have all the answers
Then a young boy or girl asks
“Is there a God in our lives?”

Oh yeah Ambi got a “Datukship”
I read it today
So are MB of Perak and his Senior Exco Member
And the Bar Council…………..
The BN wants to play fair

I have more questions...

Can Ambi reject the Datukship?

Is the procedure similar to Pak Lah appointing Ministers/Deputies where they were not informed beforehand?

Are the awards given based upon the MB's recommendation?

The trend nowadays is to award the heads of the Armed Forces and Police as similarly done by the Kelantan Sultan recently. Did the Sultans consult each other?

To answer your questions

1. Yes ,she can reject the titles.

2.No, the procedure is not the same as the PM's appointment of the cabinet.

3.The rewards are given based on a number of things. For the states, the MB can nominate, but the Sultan's can reject.Of course, the Rulers also have thier own candidates. The conferment of state titles is after all purely at their behest.

At the Federal level, nominations by various bodies such as, the various ministries, the PM's office, are sent to the a Government division,which if I am not mistaken, is called Bahagian Adat Istiadat dan Pengurnian. Notwithstanding certain security and criminal vetting procedures, their recommendation I think would be pivitol if not binding.

Of course, the King can also have his own candidates.

4) It has become a practice that some positions in the Goverment, such as IGP, AG, KSN etc- etc will entail with it the conferment of certain titles.It is more to maintain the dignity of the office rather than about the individual concern.

It is a tradition of sorts, a birocratic regularity if u will, but it is not a must.And usually, their would be a parallel conferment at the state level.

For instance, if you become an IGP, it is a practice,as ONE method(but not the only one) to uphold the dignity of the office,( not only to the public, but also vis a vis the other goverment departments)that the you will be confered a first class 'Tan Sri'.And usually the various states will also confer upon you titles.And if you came from a particular state, say for example Perlis, it would be normal that Perlis will confer upon you some of the highest, if not the highest titles, that she can confer. After all, it is an honour for Perlis, that one of her sons, has reach the highest post with the police.

N BTW, it is NOT A RECENT TREND.

5) At the state level,( not sure if the same holds for the king) the rulers have an absolute athourity to confer titles. They DO NOT NEED TO CONSULT each other but they can if they wanted to.But i doubt they do.

YOU GUY SERIOUSLY THINK THIS OLD FART LAH CAN BE TRUSTED?

Hey Mat Rempit....have not seen you in blogosphere for some time. Welcome back.....now we can have recourse to you on all titles etc.

Thanks and I am sure Keang has his questions satisfactorily answered.

The dinner was hosted by Bar Council but SPONSORED by government. See Bar Council website - Ambiga's invite and notice to members.

Bro Zorro,
After read toyo blog,i feeling that if we want our PM to be installed,all of us should stop asking their PM to resign..cos,if new UMNO PM appointed,the rakyat mood may change,thus,our PM may have face difficulties.What do you think,bro?

Was told that a DAP member cannot use his/her datukship title until he/she leave the party. Is this true as the Perak Deputy MB got the award?

Bar Council acting in concert with Dollah ok. Bar Council knew about this dinner to be paid by the government 2 days before the dinner function on 17th April. Why was there a need for Ambiga, oh ya Datuk Ambiga, to hastingly announced in the Bar Website on the 15th.


Why didn't she announce the fact that the government. sponsored the lawyers dinner.

The function was to save Bodohwi and not the judciiary!

dinner was paid b y U and i ma! our money man! anything to make the flip flop man look good and mahathir bad! after flip flop goes, we must have one more commission to look into the abuses of current pm! thats the trend! as they say, lets have some fun, after all it's our money!

will this make flip flop aab win over his umno brothers and sisters? heheh! they still want him out! and Mat Taib is helping to get him out by making stupid statements that rile up umno members!

Cannot answer your questionlah becos i dont understand the context.For instance 'what party are you refering to?'

Ngeh Koo Ham, the Perak DPM from DAP, was recently awarded a Datukship.

According to an old DAP party member, DAP members are socialists and therefore cannot use the title until after they leave the party.

I don't have access to the DAP constitution and was wondering if this is true.