THEIR COTTON-PICKIN' HANDS ARE ALWAYS IN THE WRONG PLACE.

HANTU was so incensed that names were being dropped around and some were even gambling over the odds as to who was the former Cabinet Minister who butt-pawed a lady. I know that in good time he would give me the identity of this degenerate. But of late I have noticed his short fuse. When further pressed to reveal the identity of culprit, made worse when those around were mimicking an owl's call of "who, who, who, who". That raised some hackles and he flew of with something like "double after me!" Me or mee, cannot be rebus, rebus....or is it me as in "I"....that would be a double J whammy........the same shifty-eyed who said that the darker you are, the lower your caste. How low can you go....or how low did you go....the journey your hand took, that is. 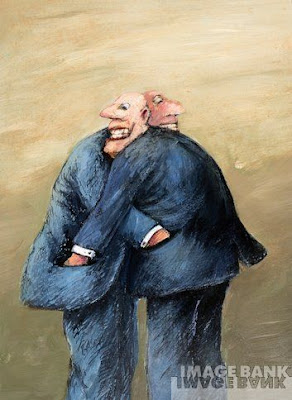 Here is another hand-job....and this one into the cookie jar. Word has it that a deputy minister (is it the FT, I wonder?)is one of two directors of a bumi company supplying road reflector paint & signages, being slapped with a RM8 million suit by a supplier. The company will invariably end up bankrupt. If the deputy minister is declared such......will there be a by-election. Is he Untouchable? Will this deputy minister be defrocked? and flogged? You see when you kick up a fight in the family, and sparks fly all over and some are incendiary.....and then it smokes out the tiny little inhabitants hibernating within. GREAT BALLS OF FIRE....so the song goes.
Posted by zorro at 7:14 PM

Those who wanna know more should read this

Two years ago, while still in the cabinet, the ex-minister was criticised for making disparaging remarks on the ethnicity of a Malaysian female student during his visit to a university in the United States."

1. she is engaging and represented by a very senior lawyer???
2. the a-g gani patail already in the picture acknowledging the statutory declaration. so fast.

something (not right) going on here.

Spin machine spinning out of control


Both these companies that were set up 35 years ago by those who walk in the Terengganu corridors of power when the Agong was still in primary school are now being linked to The Agong. This is clearly a spin machine that is spinning out of control. Maybe they think that this ‘revelation’ will frighten The Agong and will probably make His Majesty ease up on the demand that the RM1 billion a year wang ehsan be taken back from Umno and handed over to the state as what had been decided by Parliament in 1974.

The Agong is not the only victim of this spin machine. There is a book called ‘100 DALIL MENGAPA NAJIB TAK BOLEH JADI PM’ that Malaysia Today has received from an anonymous source. Of course, the party that gave us this book wants Malaysia Today to publish it, maybe a dalil a day for 100 days. We are still studying the contents of this book to assess whether the 100 dalils are mere innuendoes and insinuations or are really points of substance. No, contrary to what the government says, Malaysia Today does not publish innuendoes and insinuations.

Those close to the Deputy Prime Minister are not being spared either. Malaysia Today was given the name of the ex-Minister who has been accused of molesting the cigar girl in the Havana Club in a five-start hotel in KL Sentral. Malaysia Today’s initial investigation points to a smearing campaign aimed at bringing down all those close to the Deputy Prime Minister and it seems the incident has been denied by the girl concerned.

On Sunday, Najib sealed a secret pact with Prime Minister Abdullah Ahmad Badawi. Yes, Najib has thrown his forces behind Abdullah and has sworn to sink or swim with his boss. This has riled the Team B forces and they now want Najib and his boys brought down as fast as possible so that Abdullah can be isolated and brought down as well in due time. And this is probably the reason for the smear campaign that suddenly intensified the last few days.

Hmm…everyone is trying to bring down everyone so maybe we should just sit back and watch who is going to be the last man standing. Then, maybe, we can leisurely stroll in and pick up the pieces, if there is anything left to pick up after this.

JUST FANCY THAT: My posting was at 7:14pm; Rocky at 7:49 said that the victim, who reneged, has been assigned a top-notch lawyer....gee how fast the judiciary moves....IF IT WANTS TO..... IF IT IS FORCED TO...AMAZING....and that is putting it gracefully.

sigh.... that MP with double J whammy may have made a hefty payout to keep quiet...

I have no doubt 2 can play and are playing...there is no reason we should be so naive as to assume just because PR is the people's voice that there are no provocateurs inside it either.

tell you wat zorro..as for this sexual harrassment deal..
Yes things like that happen
Some men can be sleazeballs

And here I am being politically incorrect..

If this story pans out to be a plot and untrue, I would be very pissed off with that woman!!

Why cry "wolf" and in that process lowers the creditibility of women everywhere?.

I can hardly believe this incident happened esp when THEY KNOW the world's eyes on them, and a public place??

the 1st picture was sexy!

Who butt was that?

To know the answer to the first part, you gotta be scientific and innovative.

keep the good work UP!!!