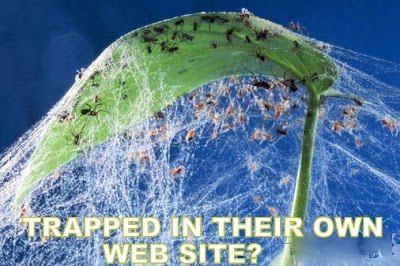 THE long wait was worth it, but I figure there is a whole lot more we do not know until CITIZEN NADES and TERRENCE FERNENDEZ smoke them out. It is rib-tickling when the names come spilling out....like all in the family. Will the three-piece-suited crooks be prosecuted? Luckily there is no murder involved.....as it is, it is easier to get away with murder than white-collar crimes and lock-up slaughter.

Todays posting is not in its traditional BLACK,
as the government has just indicated
that black is taboo.

Latest updates on Chin Huat HERE
Posted by zorro at 11:51 AM

And Dr M this morning something interesting about Perak.

(So that we are distracted from the Port Klang issue?)

Yesterday, the son said it was perfectely OK for the takeover by BN and today the dad is saying something different.

The rakyat are being conditioned to accept anything that does not conform to the Constitution which is the supreme law of the country?

Or are being confused by these type of people so that while the rakyat try to sort out and realise actually what is happening - these fellows make quick kills and enrich themsleves?

Thats why we have the 'legal' takeover of Perak government by BN, missing medical evidences in Sujatha's death inquiry, so many interpretations of the Kugan's post mortem report, and still unanswered questions in a foreign girl's murder in Selangor a few years ago.

The Malaysian Indians have their own share of challenges, like an ailing fellow who wants to be president till he dies and in the meantime does not open his mouth on how to return the investments by the poor who paid up to buy Maikka Holdings shares. The government too does not see anything 'wrong' yet in this matter - though it came to the rescue for Multipurpose Holdings some time back. Thank you Dr M and Tun Abdullah for your concern for the plight of Malaysian Indians.

The civil servants who are supposed to be neutral and tell the politicians on what the rules are, instead break rules to satisfy the corrupted politicians.

Pakatan and the rakyat should not give up at all.
Just follow the rules in facing these type of challenges.

For inspiration - look at the u-tube http://www.youtube.com/watch?v=LU8DDYz68kM

The small calf in the video is symbolic of the 10 month old PR state government of Perak.
The lions - they showcase the corrupted politicians who created the chaos.
The corcodiles - the evil forces that pumped in the money through special draws and also the civil servants who were so frenzied into killing democracy.

The family of the calf - like the rakyat who waited and then chased out the corrupted politicians.

People - just abide by the rules and laws, till you get the golden opportunity to get rid of the lions,
Once that is done, the corcodiles can be managed without hitches.

The land belongs to the original settlers of Pulau Lumut who were forced out of the island on the pretext of development. They received peanuts for their land and the rascals made money at the expense of both the land owners and the taxpayers. But they will surely pay, there is no doubt about it. It is just a matter of time.

The guy who sold the land has a RM36 million house being built in Mines Resort, next to Tun M's.

Wow! seems to me it is one 'big happy family' ganging up to screw the Rakyat. Screw us they did.

i just caught a zizak & painted it BLACK with indian ink which is black ....hahaha !!
i'm going out to buy some fish which is BLACK ?!
....i'll print A4 picture of zombie
in pitch BLACK then burn it into
BLACK ashes !!
....what else...what else ??

Thursday is BLACK & NOT anymore 'mondays' in the bolehland, ok !?