On Monday 11 May the Kuala Lumpur High Court had pronounced that Nizar was the legitimate menteri besar. Following that Zambry had to vacate the office to allow Nizar to return to power.

On Tuesday 12 May Zambry was successful in obtaining a stay order against the decision, pending his appeal to the Court of Appeal. No date has been fixed to hear the appeal. Yesterday Zaki’s boy, newly minted Court of Appeal Judge Datuk Ramly Ali outdid Marvel Comic character Flash, by fast-tracking the stay order, thus capturing the coveted “PERFORMANCE NOW”Award, and thus prompting this comment: 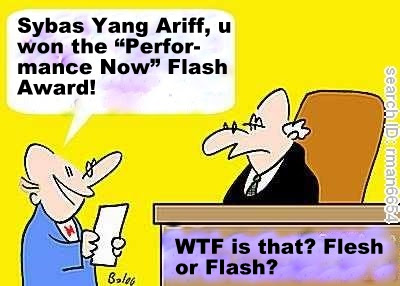 "There is disbelief within the legal profession that one of the most controversial cases to pass through the court system this year did not go before a full panel of appeal judges.

Ramly also did not allow counsel Sulaiman Abdullah, for Nizar, to apply to the appellate court to impose conditions on the stay order. 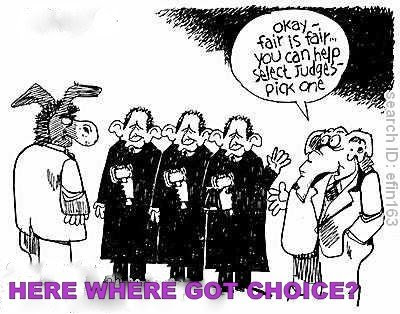 Today 13 May Perak Menteri Besar Mohammad Nizar Jamaluddin has filed an application at the Court of Appeal to set aside the stay order granted to his rival yesterday.

The set aside application was filed at the court registry in Putrajaya at 2.20pm.

We can expect a long wait for this one…..nobody is interested in this “Performance Now” Award, because when you become second in a race, you are actually the winner amongst the losers, NO? Moreover if you get two winners in a week you kinda cheapen the award. Anyway delay is OK, some have died in remand prison waiting for their appeals to be heard. What’s one corpse compared to the survival of the government. However, the rakyat can wait….it gives them opportunity to build up their anger.

However, DAP Perak secretary Nga Kor Ming sarcastically praised the Court of Appeal for expediting the case and granting a stay order a day after the High Court decision.

"We hope that the judiciary would show similar efficiency in the case of Osman and Jamaluddin," he said, in reference to the multi-million ringgit graft cases against Changkat Jering assemblyperson Osman Jailu and Behrang assemblyperson Jamaluddin Osman.” Dang I clean forgot about these two felons.

Back to the stay case. Another legal observer said that Ramly should have ONLY granted an INTERIM stay and not a permanent one.

Given the gravity of the case and political ramifications, several lawyers noted that the court registrar should have ensured that Zambry’s stay application was heard by a three-judge panel, and not one of the most junior appeal court judges.

Lim Kit Siang said that “the stay given by a single judge of the Court of Appeal did not overturn the High Court decision and could not be taken to mean that Zambry can continue to be illegal and illegitimate . It only 'STAYED' Nizar from taking back his lawful and legitimate office as Perak Mentri Besar.

“The lawyers I spoke to in the past few hours are shocked at the Court of Appeal single-judge ’stay’ decision.’’

I have made some observations: the High Court judges seem to have more moral spunk and independence than those in the Court of Appeals and Federal Court. Why?

Anyway for the crooked ones enjoy this nursery rhyme that I used to bore my two kids to sleep in their sarong-spring-rocking baby days:

for all but watch this video first.

1. The expediency in which the Stay Order was obtained was obsence
2. The Order granted with such haste was despicable considering the application was disallowed in the High Court
3. And the fact that Nizar's follow-up application was fixed for hearing only next Monday shows the inequality and disparity how they dispense their so-called justice
4. Is it the system? Is the laws unto themselves? Or is it the men donned in black robes?
Let yourself be your own Judge.
malsia1206

Zambry got his case heard within hours, but Nizar will have to wait 3 days to have his case heard. WHY everything so special for Zambry right from palace,the police,the state assmebly staff and now the court.And he got the cheeks to complain he has sufferred like ghandi,mandela !This joke should enter Guiness Records as all-time hyprocrisy.

Bapok Ramly, go fuck off. You are in the same category as the Hee bitch, Zambry, etc.

Might as well put zambry in the judge's chair.

what do you expect, zorro? courts favouring the opposition?

Good article Bro and your sense of humour is great given the topic you have discussed! I shall not add to the already growing chorus of disenchanted Rakyat on the current political situation in Malaysia!

On a lighter note but nevertheless a serious one, get your composing into top form when you compose UMNO/BN'S goodby song come the next GE in the form of "One crooked Putrajaya with all the crooked politicians planning a crooked bridge/highway for the benefit of their crooked cronies"!!!!!!!!!!!!!!!!

may be ramly is zombie's adopted abang-alik from the same pulau leh !!

Do you don't this junior half-past six judge wrote the judgement himself? I doubt his competency.

Can someone please show a pic of tis Ramly guy? I wan to see the face of this crooked judge.

Leave it to Perakians..we be the judge.

Zorro...go listen to the VK Lingam video tape again...a very familiar name is mentioned there as being identified for promotion...very telling...

The mad man of Malaysian politics, Mamakthir aka the uncrowned firaun of UMNO caused the judiciary to lose its stature and esteem by corrupting them for his nefarious schemes.

Now one of the devils spawned by his ketuanan decree is showing all and sundry what a powerful and knowledgeble clown he is and that as a Court of Appeal judge.

When you have a UMNO/BN friendly (exUMNO legal advisor) as the CJ and one who was given triple promotion to sit and judge in UMNO/BN's favour, what sort of courts can we expect.

Of course not all the judges in the judiciary are bought. There are still a few learned judges who uphold their responsibilities and ethics close to their heart but what can a few do? Their decisions can be overturned at the drop of a hat by half-past six judges with questionable pedigree.

When kangaroo courts can be called to session at the whims and fancies of the government in power, justice is not only prostituted but raped as well.

Ramly Ali is all the way for Najib's 'Performance Now ', see how fast he came out with the 'stay order' !!

does that mean the high court decision is SALAH !? who is in contempt now ?

Nizar is actually a legitimate MB but he cannot work in that building yet ...RIGHT ? who is the @#$%^&* not allowing him to kerja ah !!??

Flash Flash the junta of Burma has
accepted one new member as co partner the appeal court judge Ram-be ee So UN now has to think that
Burma is not that bad after all. Malaysia is also like them. Thanks to the PM of 1Malaysia for putting the map of Malaysia into the drain.

we should have more efficient hakims like him man !!