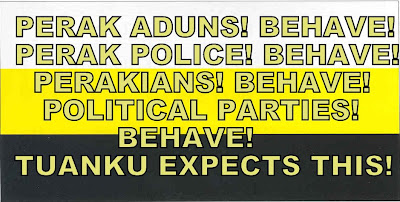 , 4 May 2009: Perak Speaker V Sivakumar wrote to the Sultan of Perak this morning seeking a postponement of the state legislative assembly sitting scheduled just three days away.

Sivakumar said he requested the deferment of the 7 May sitting because the matter of who was the rightful Perak menteri besar is still being heard in court.

Sivakumar, a DAP assemblyperson, also said he was concerned about the situation in the House getting out of hand.

Sivakumar said his letter was sent to the Istana Kinta office around 11am this morning.

"I am of the opinion that it is not appropriate for the state assembly to be held when the position of the menteri besar is still a matter of dispute.

"Additionally, I am also worried about the conflict and disputes which will be difficult to control on that day. I anticipate that both sides will also be trading barbs to defend their respective stand. To protect the harmony, dignity and honour of the House, I have asked Tuanku to postpone the assembly sitting for the time being," Sivakumar said.

The Speaker's concerns are valid, but if HRH The Sultan of Perak, for reasons that we have to respect, convenes the Assembly, then the assembly proceeds. Should anything untoward happens in the assembly it will be an insult to the Sultan. Similarly should the police show unfairness to Perakians WHO WILL BEHAVE, that would be an insult to Tuanku. Perak is not a police state yet! Should political parties gathered to support misbehave by taunting each other, this too would be disrespectful to His Royal Highness.

07 May belongs to the people of Perak. They will gather PEACEFULLY. They will assemble and BY THEIR PRESENCE silently give out this APPEAL to all in the Assembly, the Sultan included:

DO THE RIGHT THING RIGHT.

The Pangkor pirate and his gang
Busying counting the eggs before it hatches
The last hurdle is going to happen
The house Speaker can reject it
Since he never resigns...........

Uncle, what beats me is the PRDM allowing themselves to advise the ADUN to behave. Not even to mention PRDM is already unable to perform its normal job of policing the streets, they now undertake to police legislative assemblies.
Hello! Ever heard of the separation of power? Where were they then when 20 UMNO Youth thugs (sorry this is a pleonasm) roughed up an OKU, even though he is indeed pretty much a lion, in the parliament lobby?
In this country now:
a) judges comment on what the constitution tells them not to (article 72),
b) the EC which refuses to enforce the law (spending cap by election candidate) now makes up its own rules and instruct the police while not tackling the issues at hand (cap of 5000 supporters during nomination hour, not day),
c) Suspended clerks call for DUN sittings without even telling the DUN Speaker,
d) State Secretaries and State Legal Advisers publicly display their political leanings and get away with it.
Just a few, there are sadly a lot more to say. Why does it seem most public institutions seem to behave like BN components?

Sure or not Perakian PR supporters will behave?
Thats not what we saw in their behaviour towards the sultan a few weeks back...

Back to the issue of abolishing ISA...
Did u guys know, that if the JI members were taken to court, they will be hanged for waging war against the Agong?\

Does the families of this detainees that you are all conviniently using for your political gain know of this circumstances? Do their school going sons know that you PR people are trying to hang their father?

ISA gives them a chance of rehabilitation without facing the full wrath of the law!

Stop using ISA detainee families for your political gain ! because you have misled them to thinking that your fight will free their husbands/fathers. Instead, they will be hanged if they are brought to the court of law..

Perakians have always behaved, and a very patient lot too! They lost the government they had voted in at last year’s GE-12 in a 'coup d'atat' staged by none other than PM Najib Tun Razak and with the blessings of Tuanku the Sultan, to rule the state without the mandate of its people/electorates?

For 3 solid months Perak has been without a legitimate government as they watch a bunch of brainless bloopers led by this Snake Oil & Gambir now-turned Camry lelong salesman, play monkeys.
Are Perakians still expected to continue to stand watch this constitutional mess that has been threatening the well-being of every Perakians in the state?

Are we also expected to tell our grandchildren and their children that we did nothing, felt intimidated and too fearful to emerge from the comforts of our homes and that we just watch "live" on tv as history unfold?

@Pro ISLAM!
"Back to the issue of abolishing ISA...
Did u guys know, that if the JI members were taken to court, they will be hanged for waging war against the Agong?"

You consider JI members guilty prior to judgement. It should only be so because you have access to evidence while PRDM does not, failing which they would charge them in court accordingly. Your duty is to report this evidence to the Police, unless you are willingly concealing proof elements.

@emi
"Thats not what we saw in their behaviour towards the sultan a few weeks back."
Likewise, if you have evidence of misconduct, it is your duty to communicate it to the Police. Do not just sit there.

Uncle Zorro, why are the UMNO militants commenting on your blog giving such little help to the Police?

Eric...I allow them space here so that you people can reeducate or overhaul their close minds. I could counter them, but you guys are doing a good job. Thanks. Haven't seen you for sometime....maybe in Ipoh, huh?
Hug her for me.

C u definitely in Ipoh!

Yo Z, I heard recently from a former MSM staff that NTR wanted to recruit 2000 bloggers.

With the 'growing' presence of these BN/UMNO CTs on your blog, I'm beginning to think that the information is pretty accurate.

Soooo.. who's keeping a database of new nicks popping up? And I wonder who are their team leaders?

Btw if I see you in Ipoh, will it be alright if I wave 'hello' from about 50 meters away?

shar101, you have a very strong point. Plenty of new BN "bloggers" have invaded comments all over the blogosphere. They always use the same tired and empty themes: give Najib a chance, BN's track-record, Islam is under threat, Malay Malaysians unite, etc.
And no substance to back it all. Beware!

Well, if the JI people are found guilty IN a court of LAW of waging war against this country, then we must follow the law to hang them.
It was their own prerogative to "wage war", so they will be punished.
What we shouldn't do is detain them without any visitation rights for their families.
Noticed most of the pro-ISA people are impervious to logic and reason.

Impervious? Ya lah, pro ISA guys are impetuous and it is hard to access or penetrate their thinking.