BLACK CANNOT, BUT WHITE IS THE COLOR FOR COWARDICE! 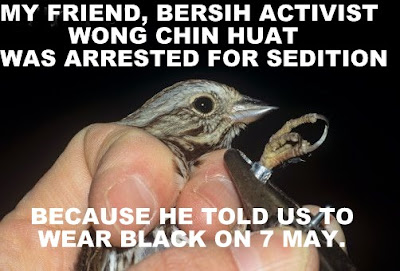 As we gathered at Bukit Bendera to lend solidarity to Bersih steering committee member and journalism lecturer at Monash, we became aware after lawyers were refused to aid him, that he was whisked away to an unknown detention centre. Shoot up a prayer for Chin Huat, please. We will continue to update you as we get more information.

Today's posting is not in BLACK because
the Government
is currently afraid of anything black,
especially black apparels.
Posted by zorro at 2:48 AM

Give them a pitch black!

I have a more accurate slogan for what we see shaping as Najib's premiership: "empty promises, indecision and police state". Sounds truer than the original, right?

Hello Uncle Bernard,
The standing order is to wear black tomorrow. Is it on or not. It doesn't matter whoever got arrested, the order is already out, so on with it.
I'm down south and in sympathy with Perakians. Tomorrow my black T-shirt is definitely on.
Anybody comes to tell me off, I'll tell them that my underwear is also black, must I take if off now?

Why the editor & owners of UTUSAN were not taken into custody when they call for "Rise Of The Malays" to create racial tensions ...?????????

This Government may not realise that 1 single arrest in such circumstances would destroy 10 good deeds which it is trying to instil in the confidence of the rakyat under the premiership of the new PM. That translates to loss of more votes for Barisan in the next GE. This Government is doomed to fail by self-destruction.
malsia1206

Bro,the UGLY HEAD of Hisham(Hummer H4) is starting to show up...this young punk trying to muscle his power.Look at him ,how he answered reporter re release of ISA detenees on TV yesterday,so arrogant and fcuk face...

Do you hear no black or white?
Albino getting scared
Using uniformed agencies
Putting blocks on people
It never works
History has said so many times

Malaysians are either too tolerant or too selfish...allowing this evil regime to have the better of us. Come, come, don't expect true democracy to be handled over to us on a royal plate! If we allow these UMNO bastards to take advantage of our good nature, allowing them to continue with their despicable acts...to divide and rule and take all the country cookies for themselves...we have ourselves to blame. Don't expect a few upright individuals to fight for our cause, stand up now and be counted.
Perak State is the best place to launch and defend democracy...live with freedom or be trampled!

Melayu Sengal....just wear it for Wong Chin Huat who got arrested for asking that we wear black on Thursday.

Wear black tomorrow people. If your shirt is white use anything black and make a cross at the centre. If you have a black car, drive to work or wherever you want to drive. Tomorrow is Black Thursday.
If you don't have black shirt, pu on anything black. GOD bless Malaysia and release Wong Chin Huat and the rest of ISA detainees.

Come tomorrow, let's create an ocean of black throughout the nation!!

Chin Huat knew that he will be ‘IN’ sooner or later, (he just made it sooner)
He wanted to be one of country’s political leaders and the trend is you need to be a registered ‘member’ of KDC!
That’s his ambition! So let us all congratulate him for his progress instead crying foul!

What kind of @#$%-up Govt is this? Arresting people on the slightest excuse. Sedition my balls.

I think for far too long, we value 'peace' too much and becuz of that, we kept the govt in power for more than 50 years. But the so called peace we have in this land is not true peace. True peace is when every citizen is respected, when democracy and human rights are being upheld, when people's voices are not subdued, when those in authorities and power are there to serve the people who voted them in. I will wear black tomorrow...

It may take some time to manage, but I might consider rearranging my wardrobe so that I would be in black everyday!!!

ANY HONOUR IN YOUR COLOUR?

As world's free people of honour
Let us all show our "true colour"
Whether at the brightest or darkest hour
Who we can turn to as our real Saviour?

Who says white is the colour of cowardice? Don't start a nonsensical interpretation.

White stands for all that is good and right.

Who the fick is advising the Crime Minister? A bunch of morons I think. Now he will have a problem trying to explain to the people his 1 Black Malaysia oopppss!! 1 malaysia thingmy concept.

I didnt know its so scary to wear black clothings..i thought it was cool.Better throw away all black clothes if not accidentally wear ah then in trouble

Anti Mindlessness....I never forced you to believe me. Anway, have you heard of the white feather, or the white flag.

I’ve no choice but to agree that WONG CHIN HUAT deserved to be detained. BERSIH is one USELESS ORGANIZATION of which serves no whatsoever purpose. Moreover, it only causes unnecessary CHAOS & PROBLEMS for the ‘rakyat’.

Take a look at what happened during the recent BERSIH MARCH. The rakyat was forced to endure extreme traffic chaos, while, entrepreneurs lost MILLIONS of business due to the inconsiderate actions of BERSIH.

The most effective way to eliminate such NONSENSE ORGANIZATIONS like BERSIH is to first get RID of WONG CHIN HUAT. I strongly suggest the Government to have CHIN HUAT sent to KAMUNTING RESORT for good….

WONG CHIN HUAT is a PEST to Malaysia’s peace & harmony!!!

Only a DUMB FOOL will ask people to wear BLACK when the weather these days are SCORCHING HOT.

No wonder this DUMB FOOL by the name of WONG CHIN HUAT was arrested. Serve him right for requesting STUPID THINGS!!!

He might as well request everyone to be NAKED instead. At least, that would make more sense than wearing BLACK.

Judge by my actions was the pleading of PM Najib's 1 Malaysia policy.Now we understand that even calling to wear black and sending cake is not 1 Malaysia Policy and hence subject to arrest and conviction.

Actually it is not difficult to understand why the Federal Govt is doing all this. They simply lost all moral authority to govern.

Why? They don't even respect the Federal and State Constitutions.

So, might is right. Comparison of Malaysia to Myanmar and Zimbabwe is not unfounded.

Ummm...Bernard, If my memory is not corrupted by gutteruncensored, then I think the colour for cowardice is YELLOW, not white.

Anyway, its just a matter of interpretation.

Chin Huat's favorite movie must be the 'MIB'. who the FCUK he thing he is? btw, BERSIH begins at home, wash your @SS %#L% first!!

You damn right TOKZ & Black=funeral, hopefully the government will BERSIH all of them and don't forget Zorro too...

telur dua, u donno what u'r talking.. too much telur in ur skull hah?

This statement - "I never forced you to believe me" is a most irresponsible statement by an adult.

Typical of shifty-eye street peddlers or snake-oil salesmen who sells you junk and then refuse to refund when you discover you have been scammed.

And I understand you were once a teacher. Is this the example and value system you set for younger adults and teenagers?

And for your info, white flag is not a sgn of cowardice and i you research the matter about white feather deeper, you will also find that it goes beyond cowardice. Get your facts right.

Hmmm...looks like there are a few UMNO shit stirrers here...is it a sign of the violence we should expect from goons?

"Manliness consists not in bluff, bravado or lordliness. It consists in daring to do the right and facing consequences whether it is in matters social, political or other. It consists in deeds, not in words." Mahatma Gandhi