NO WAY WILL KU LI ORDER THIS! 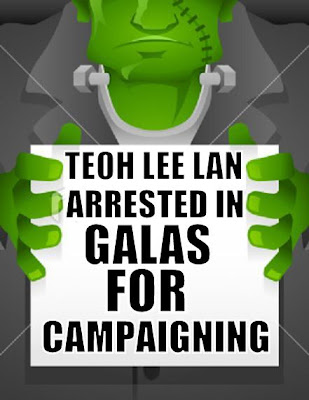 BY THIS STUPID ACT
UMNO HAS LOST THE
CHINESE VOTE
IN GALAS.
STORY HERE
Posted by zorro at 6:52 PM

No arrest so far in Batu Sapi. Sign of BN's confidence in winning the seat...

The important question is this ---->

WHY IS KULI NOT CRITICISING THIS MOVE MY UMNO?

WHY IS HE SILENT?

Remember, to be silent is tantamount to being an accomplice.

What's your take on this, Zorro?

I ask all readers here not to fall for Ku Li's "reform" talk and "great statesman" posture as easily as some have.

He is, after all, a persistent UMNO politician although the more sophisticated, the "I am more dignified and royal" type (the smooth operator). Records show that he is still all talk and little action, where actions speak louder than words. So let's not fall for for Ku Li's grandiose rhetoric. Observe what he is actually doing or achieving.

and fat bugger went around bribing the voters nothing happen ?

WTF! These pigs are getting too much! On whose order did they decide to arrest an innocent lady who was obviously campaigning for JUSTICE for her poor brother! You are all living in a police state and no two ways about it...you people have to get rid of this moronic government!

This is a big mistake by mca.

mca is going to pay for this!!!

Sure, MCA leadership will like the TBH issue to be buried!!
But the rakyat will make sure TBH's case is resolved satisfactorily!!

We will make sure the issue will be in the public's radar until the MACC is brought to account!!

Not just chinese vote as no Justice minded malaysian can tolerate this kind of behaviour.With this kind of arrogance,it is time mca just close shop.

It is good that the police arrested Ms.Teoh & 3 others.
This will keep the spirit of Beng Hock alive as a fighter & in all of us.
The family , friends and supporters of the late Teoh Beng Hock will take this as a bigger challenge.
More will hate the bn.
Which Malaysian does not know that the govt agencies are part of the bn by now.

Did'nt this noble prince demanded a fair by-election? The arrest of a citizen who did no wrong...only seeking justice for her murdered brother, why is Ku Li keeping quiet
...or, is he just another UMNO pretender?

Did'nt they say the enemy of my enemy is my friend??

If BN loses which at the look of things it definitely will, won't that be a good excuse for umno to bury Ku Li once and for all?

Stupid people being manupilated by Pembangkang Rakyat (PR).
What a shame!
How low can PR go?

mca's Heng Seai Kie got overnight fame by employing samseng to harrass people. No nterpart - different from her male counterparts, do not help rakyat to seek justice.

She will be haunted by TBH.

'Malaysians for Beng Hock' and particularly for Lee Lan, she has scored an obvious victory against the BN bastards!...thanks to the arse wiping police officer.
I have always suspected these below par blue uniform mudheads are arseholes...I was proven right.

just want some clarification. Is Beng Hock case a Chinese issue? why you said that with the arrest of his sister that BN will lose Chinese vote?

Is it now Beng Hock case is seen as a racist thing?

Those who have been around long enough to remember Ku Li in the Cabinet will know he is no different from any other UMNO politicians...

They switch from liberal to extreme and back to liberal when it suit them... Khairy & DSAI... all UMNO alumni...

Once an UMNO man, always an UMNO man...this is what a cunning politician TRH is all about. I've always been suspicious of this person despite his "princely" and "gentlemanly" facade. He talks about reforming UMNO to win the hearts of the miniscule minorities in UMNO (those that have not yet got themselves into the inner circle of the money making syndicates) and the opposition so that he can have one foot in UMNO and the other foot in PR when the opportunities presents themselves. But his true colours and true self are now emerging behind the false pretences. See how fast he agreed to najib's call to lead the Galas campaign. Suddenly his internal "enemies" are his bosom buddies again. The diseased UMNO is all sweet smelling again as this TRH goes round campaigning that UMNO is the only saviour for the Galas folks.

Hopefully you can also see through TRH.

Malaysians are in general ( or at least those commenting on your Blog ) well known to be mindless knee jerkers. 1 minute they are tidak apa, next they will support a person like their only God , then another second later they will condemn their earlier God like he is the Devil. That happened to Anwar Ibrahim, Zaid now Tengku Razaleih. Childish ? Maybe. Or issit all about survival, money , or more of it then black becomes white or any color the giver likes. Pragmatic, smart, docile, ignoramus, gullible , idiotic, stupid or all of the above, or just hypocrites. To me all are hypocrites or ignoramus

MCA is in bed with UMNO to enrich themselves. Little people like TBH and Teoh Lee Lan are insignificant in the eyes of MCA. Not only they have no sympathy Teoh Lee Lan & family but they do not wish to see justice for TBH. These people are called 'Running Dogs'....... worst still they employ violence to silence the weak from seeking justice.

Malaysia stop clinging on to Lost Hope TRH. I have said many times TRH is trying to Fight Ku Klax Klan from within as a member or Fight Communism from within a Communist Party. Stop this Lunacy hope/thinking and get on with your little disruption Mat Kilau Acts. The sooner you realise that Police = UMNO Racist = Police, the easier it is for you to see how the future is going to be played out if UMNO racist remains in power. Change is NOT going to be handed over to you on a Silver Platter.

Maybe another Financial Crisis is looming...and this time lets hope it makes people unemployed, hungry and angry.....we continue to battle the PRICKS in UMNO and make life Hell and Full of inconvenience!! Think harder what you can do undetected and unknown....We are fighting an EVIL Regime of UMNO-BN......their talk are all Sandiwara...Ignore them!!

Well.. Its curtains for BN for sure. PAS will win!

The Malays need to realise that in order to keep the malay agenda alive and to uplift the majority race of this country, we need to be united and not split our votes. And with that, we do not have the pendatangs taking advantage of us

When members of the ruling coalition be they UMNO or MCA do not have the courage to face the grieving relatives of a man who was found dead after attending the MACC office, it shows what human values these people have (or more likely did not have) and how fit (or unfit) they are to rule the country.

BN just missed a major election coup that was handed to them on a platter. APCO should have advised BN to receive the grieving relatives with open arms and promise them everything under the sun. Heck, the voters in Galas would have been extremely impressed by BN's humanitarian gesture. Once Galas is BN's, they can just go on business as usual. After all, was BN ever concerned about living up to election promises?

Many Chinese I sopke to are very disgusted by the mca action. We will reject mca at all cost!

Our Sejarah syllabus should state that Umno had aimed to embark on a ‘Malaya for the Malays’ policy and that was why Dato Onn Jaafar broke away from Umno to form his Independence of Malaya Party (IMP).