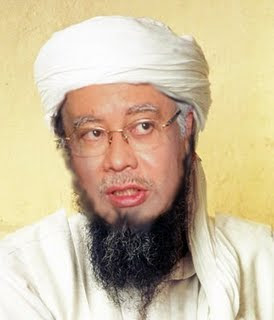 (Bernama) - Prime Minister Najib Tun Razak today invited the local media to be his partner in his journey to transform Malaysia into a more prosperous and peaceful country.

He said the government needed the media to communicate with the people and educate them throughout the country.


"I would like you to be my partner in my journey to transform the country," he said at the inaugural National Press Club-Naza Awards Night here today.

Najib said mainstream media organisations obviously had a higher standard of accountability and were more mindful of what they reported, being aware of their standing as respected media establishments.
"I, for one, believe that the Malaysian media is something that we can all be proud of," he said. 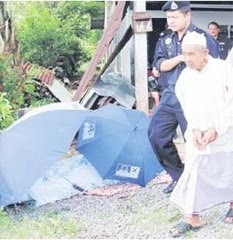 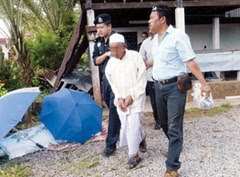 Miraculous! If miracles like this can happen you have the right partner, sir.


"I believe the world media can take some lessons from our Malaysian media, who don't shovel into the private lives of individuals, generally speaking, or launch... personal vendetta.
"I believe that if we are at peace with ourselves today, it is because the Malaysian media has tempered its coverage of sensitive issues with a huge dose of social responsibility," he said.

So far thus far , Najib has impressed us tremendously with his impeccable Nottingham. But the words that kept falling out of his pinky lips of late are quite frivolous and close enough as spittings of a flimsy drunkard. And so we will not take him seriously but wait fro his frivolous departure ASAP

And remember one other partner (or a partner of his partner) was blown up with C4. How's that for partnership?
malsia1206

The 3 critical evergreen partners of the PM - Utusan Malaysia, The Star and Malay Mail. The PM needs no more. Three is more than enough. If the China Press joins in the partnership, the IGP would have his service contract extended again. Surely the rakyat would not like that to happen.
malsia1206

What is so inaccurate about the report on that PIG ooops…IGP resignation. The whole issue is that China Press got the news early before Krishammuddin made his announcement and that upset him. The HM does not care about China Press. When the truth is reported, journalists often get punished. See what happened to the Ahmad Ismail episode?
Secondly, I don’t see why the editor-in-chief Teoh YK needs to be suspended. Firstly, his newspaper reported fairly accurate news on the IGP’s resignation/termination. Only in Malaysia can the media be penalised for printing accurate news on BN/UMNO.
Then again what about those seditious and false articles which has be spun from that garbage U. Malaysia? Not even a slap on the wrist was afforded for their editors for the rubbish that they produced. This whole incident is an exercise in stupidity of the highest order. Krishammuddin is the one who should apologise and suspended. Anyway, I’m glad he acted the way he did. It will definitely help to swing more Chinese votes toward PKR.
Ultimately, what happen to the 2 garbage reporting media, UM and BH?????? What they ‘publish’ almost every single day is 100 times worse than this. Why no action against them? Are you doing your job, Home Minister, or you just ‘close one eye’ when it comes to UM and BHarian?
I let the rakyat decide the final conclusion.

Being thick skin is one thing but this is really taking it to the extreme. Just like Utusan Malayu, telling big lies with a straight face.

Yeah, one can almost imagine what story-line he could come up with, should the ghost of his raya past returns to haunt him about how the MSM saved his friggin foreskin underneath his hotel room towel, when he was "accidentally checked into" the same hotel room that ZZ hadn't checked out as yet. He would add on that if it wasn't for the MSM who had professionally reported the "truth", he would have demanded for the Hotel Manager to be castrated.

uncle Zorro,
Najis is inviting more of psudo intellegent bloggers like rocky and cut & paste queen saamad...who can report in their blog... china press ..IGP exit news... as racist reoprt....these kind of spin masters are very much in demand for najis now...haa....if some one wants some awrdships!! very fast in their life ....yep fallow this rocky lah....

That pseudo-Taliban has a good sense of humour.

hehehe! read hartalmsm's take on it. I felt my breakfast migrating in the wrong direction to!

"I would like you to be my partner.." SAID THE FREAKING SPIDER TO THE FLY.

"I believe the world media can take some lessons from our Malaysian media, WHO SHOVEL into the private BUTTS of individuals, generally speaking, or launch... personal vendetta FOR UMNO UNDER THE GUISE OF OUR KETUANAN SHIT."

"I, for one, believe that the Malaysian media is something that we can all be proud of AS TOILET PAPER.." he said.

Reading his munafique statements really want to make one go frigging mad. Blardy hypocrite, shut your trap and go poke Roastporkymah if you have no better use of your time.

Fellas, running with the gutter dogs and spinning lies and slanting news pays well...just ask RockyBru, now a Datuk, zooming around in a BMW X6 3.5L; among other perks.

And rocky can say oscars and such with the likes of parpu kari n the fat dog it should be the osc=arse awards.

So Rocky is a Dato, what is all the fuss is all about?

This is politics, why we want to be an extremist in holding to our point of view?

I dont like PKR and especially DAP cause I think DAP and their chinese supporters is a bunch of racist, so what?

When we call the other side as racist, then people can call us racist too.. why so upset about it?
It work both way!

So, Zorro I think we need to respect other people point of views as much as we want people to respect us.

I heard stories about you being so racist and anti-malays/ indian some time when you were younger!!

I just wonder how true this is..

the rakyat has abandoned the mainstream media because it prints one-sided news in favour of the BN. so najeeb now hopes the alternative media will work with him to improve his credibility. heheeheh... the alternative media won't fall for it, they know they will get screwed and CeeFOURed if they go along with Najeeb...

When Utusan is spinning big lies they are rewarded with the best jouranlism of the year award.

When others are writing the truth , they are slammed with a show-cause letter and even threatened with withdrawal of their licence.

So, please work with me like Utusan to spin the untruths and you will be okay.

Sounds like a veiled threat alright - 'either you are with me or against me', eh?

He's frothing from the mouth again! The media's role and responsibility is to report news as it is, not become his "partner" or translate his govt's intention. The government spells out its intention and the media reports not the other way!

Why, hasn't his handouts of datoship and BMWs on those fakes work? Pathetic indeed.

No one forcing you to be his partner, zorro.
It's a free country.
But PR partnership is going haywire! And Anwar "partnering" with the Agong and army chief is OK, though now we know it was a big lie and people like you were easily duped. That was easy sell by Anwar :-)

Najib Razak has officially changed his name to Lan Jiao Nang. He hopes people will stop ridiculing him after this.

And partner to Pakatan rakyat is RPK.
Where is he now? Last time so berani one! Willing to die of hunger strike some more. Lots of people want to donate, and now living in lux in London ..... Monkeys!!!