I had a few rounds of teh tarik with Dato Ariff and his charming wife together with d'Nightcaller sometime last year. He had challenged the foul-mouth Papukari to present himself at Lotus to settle an issue. The pup did not appear, of course. Previous to this, I had introduced my readers to SakmongolAK47. He was the former ADUN for Pulau Manis, Pekan and a loyal UMNO man whom the powers that be did not nominate for GE12. This has always been UMNO's weakness. They find it difficult to pick honest men in their ranks for service to the nation. He is UMNO, but I know that he will punch, elbow, kick and knee me, a la Muay Thai if I call him an UMNO Blogger. He is HIMSELF, making his personal stand, without fear or favor. This IS MB stuff, people.

PM Najib must clearly disengage his administration from this apparition called Perkasa and MPM. Maybe it's just a Trojan horse backed by DR Mahathir who is stalking PM Najib. How do we know, perhaps the PERKASA and MPM are actually the extensions of the hawkish side of UMNO and its presence is countenanced and supported by the life giving system of UMNO style intrigue and political subterfuge? To allay our apprehensions and suspicions, the PM must distance his administration from Ibrahim Ali's guerrilla groupings. Why is the deputy head of PERKASA appointed as the boss of JASA?


The truth is, Malays at large don't require some supranational body to speak on our behalf anymore. They and those before them have screwed up everything. 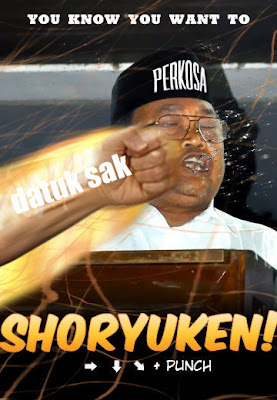 a Mob1900 brand
Today he followed up HERE
A DEDICATION TO SAKMONGKOLAK47 & MAMASITA
Posted by zorro at 10:57 AM

So he denounces PERKASA.

But why is he defending Najib, who is immensely tainted in character?

Why hasn't he questioned Najib for all the scary Altantuya links, submarine commission and moral (Port Dickson/Ziana Zain) scandals?

Hence, don't be too hasty in trying to glorify Sakmongkol.

WHAT A REFRESHING SIGHT TO SEE A SEXY AUSSIE!...RATHER BE CONFRONTED WITH P#G FACES FROM THE ESTABLISHMENT AND ASSOCIATES....

ZOR, YOUR GOOD FRIEND MAYBE A LONE VOICE BUT, IT IS A CLEAR AND DECENT VOICE...EVEN THERE IS A DECENT BLOKE IN umno, MAYBE, THERE IS STILL HOPE????

Dato S M Salim, why dont you say this in his comment box. Did I miss your comment in his comment box? Don't worry Datuk Salim, Datuk Sak may punch, elbow, kick and knee you, but he wont bite. He is a gentleman fighter, unlike Tyson who bites unfairly.

Ayo uncle. People dont like smart people.
That is why Sak is a one-term Adun.
I have not even heard of him until now.
Intellect is not appreciated.
Look at Tun Ghazali Shafie.
Acknowledged as one of Malaysia's best brain.
But he did not get to be the PM.

uncle zorro, i really respect you attitute when by calling a spade`a spade about umno/bn, pls do not glorify this umno man who has wirtten no doubt some intellectual sounding articles but deep down he is UMNO and anti PKR

We have to respect another's right to an opinion irrespective of which side of the political divide he/she belongs and calls a spade, a spade. When truth is spelt, credit due must be given.

Of course we don't see that in the many UMNO/BN 'ballz-carriers' who will die with their mouth oozing lies, filth and garbage!