ART HARUN, I HEAR YOU. 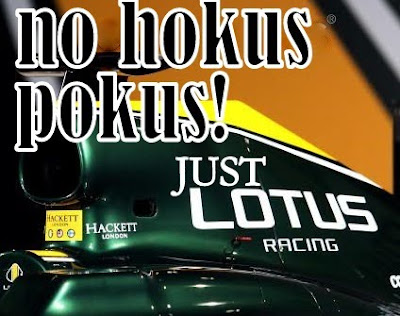 A CHAMPAGNE SUNDAY
Posted by zorro at 3:44 PM

Watching the first race yesterday, Petronas got better airtime and coverage with the sponsorship of the Mercedes GP team as opposed to Lotus.

I suspect the idea by Tony in the name of 1Malaysia is more for personal glory since there are 2 other low cost carriers involved F1. If not, why on earth would Tony be placing a bet with Richard Branson?

As an avid fan of F1, the millions spent on having an F1 team would be better used for other social projects in Malaysia.

Air Asia and Tony are using their own money and finding their own sponsors in pertnership with Naza. Proton reaps a huge benefit from leasing out the Lotus name and technology transfer/ international exposure!! That seems to have escaped your attention. And, it wasn't Air Asia that needed a Taxpayers' bailout of $5-6 billion, was it?

They are not spongeing on the Rakyat's money.

What do you have to say about Petronas sponsoring BMW F1 to the tune of several hundred millions of the Rakyat's money? Why don't you tell them to use it for 'social projects' in M'sia. Petronas can sponsor foreigners, but not home grown private enterprise? Selective economic and financial policies again?

And what has Tony's cross-dressing bet got to do with anything? Is it going to cost you or the M'sian Govt a cent? No one, including, Dato Lee Chong Wei or Tiger Woods, goes into big biz or world sports without there being an element of personal glory in it. You are just being naive!!

If Petronas or MAS or Proton wants and have the money and guts to take up the challenge without bankrupting us, let them pick up the F1 gauntlet!!

Lastly, Lotus got a F1 finish on their 1st outing, after a mere 5 months for preparation from scratch. What have you got to say about that, sour grapes?

King disappointed with new media
The Yang Di-Pertuan Agong Tuanku Mizan Zainal Abidin has expressed his disappointment that slander, lies and distortion of facts still prevailed in the new media. “We urge them to cease committing these irresponsible acts. At the same time, the authorities must take stern actions against those involved,” he said in his Royal Address at the opening of the third session of the 12th Parliament today.

The king never wrote that; ghost writers did. Its ok we wont panic.

being 2 to 3 laps down on the winners...what is the point of competing at this level when u know u don't have the finances to keep up with the big boys?
f1 is not a no frills sport.
u do it to win or u don't do it at all.

Make sure the accounts are audited, free from tax payers money.
by the way wat happen to the comonwealth game accounts which suppose to be audited?