A CANDLE FOR ZAIN AZRAI AT 8:30PM TONIGHT. 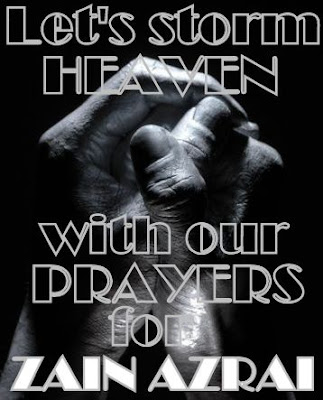 SINCE the birth of this blog ZAHARAN RAZAK'S blog ("I" of the Storm) has been on my side-bar. Our paths have not met but I feel an affinity with him as a blogger soul-mate. He wrote in his latest posting: 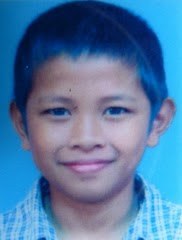 Zain Azrai, 12, In Terminal Coma: Please Offer Him A Prayer

My son Zain Azrai had convulsions from age six months until he was five years old. He was diagnosed as having tuberous sclerosis, a form of brain tumor with no cure. The epileptic fits stopped when he was five and we stopped giving him his medicine, Epilim.

.......Then about October last year, just after he turned 12, he had a relapse and the doctors decided to open up his skull and do something to his brain. He survived the operation but suffered a coma. He is now bed-ridden, not at home, but at the hospital receiving daily care and treatment. It is now almost six months he has been lying in a hospital bed. He is being fed through a tube and breathes through another tube attached to a hole in his throat. If his lungs get infected, the resultant secretions will have to be sucked out using a suction tube pushed through the hole in his throat. He is of course also wearing diapers. 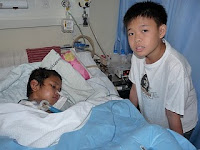 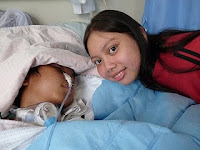 
Last night at 8:30pm we switched off our lights for an hour, being Earthday.
Tonight at 8:30pm I will light a candle on my lanai and shoot off a prayer for Zaharan, Zain and Nina . You too can, yes?
Posted by zorro at 2:28 PM

Thanks. God bless you.

We never knew how blessed we are until,we are REMINDED.

Count me in. I'll pray in earnest for this poor child.

May you recover from your coma soon, Zain Azrai.

You have the entire future ahead of you....so, you need to wake up from your coma.

I will send positive thoughts to you and pray for you tonight.

Will certainly pray for little Zain.

My Dear little Zain, You are in GODS arms in the silence that you are . My prayers for your early recovery.
GOD BLESS

I pray that this young boy recover with God's mercy. Lord cure him.

dear my lovely zain; will perform solat hajat tonite for your recovery...Insya Allah, May Allah bless you.

Zain Azrai, May you recover from your coma soon. May all your ailments cease. May you be blessed with good health, strength, peace and happiness.

May GOD bless you, Son.

As requested by Zorro, I have lit my light in my corner of the world for Master Zain Azrai.

May the Almighty Merciful Allah protect him and make him well soon.

May the Almighty Seeing Allah guide the medical professionals to take good care of him and to heal him.

May the Almighty Compassionate Allah give his family strength and courage to bear the pain and anguish and to soon grant them the grace of joy.

We will pray for you.

To Brother Zaharan, a prayer for your son and may the Medicine Buddha Guru bless your son a speedy recovery

God Bless and be strong.

Yes, I too will join in prayer for Zain and his family. May God grant them hope and courage in this very difficult time. - Martin Jalleh

Zain, our Prayers are for you and your loved ones ! May you recover soon and live a happy & normal life.
Thots from Kuching.

Bless you, B. And may our prayers be heard.

praying to almighty God to do wonders for little zain azrai & wat is best for his family ... pls have mercy on this young life & his family, my Lord! Amen!

I will say a prayer, as well. May the almighty gives this young man strength and courage. May his light keeps burning in his darekest hour. Amen, Ameen.

Dear Uncle, thanks for sharing.