YES, an apology is in order. Last week in answer to a few readers I posted why I did not comment on the MCA circus. I said that I did not want to comment on a dead party. I made a mistake. MCA is not dead, as in kaput. I volunteer that they are more a "living dead" now in ICU. Comatose! Vegetable! Period! Unless 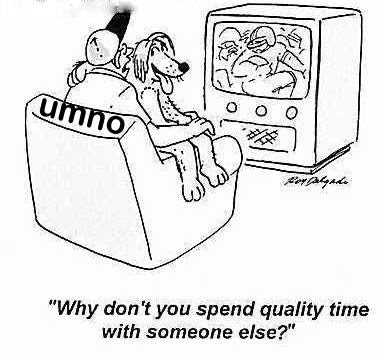 Dead men tell no tales, but the near dead or living dead are sending fractious mixed signals. They did not vote according to the fixed menu. There was no fixed menu, only mixed vegetables. It was every man for himself. Of the 3 VPs, each are honchos of the three nominees for President. One claimed to be independent, that very same one who we all booed off the stage at a pre 2008 elections forum. Donald Duck that is.

Voting in Liow clearly shows the immaturity of the voting delegates. This guy wanted to be President too. When he received signals that two was good enough, he alligned himself to Chuah. When Ka Ting was proposed he jumped over to Ka Ting. If he is not a frog, he is a toad!
For the meantime, they will be comfortable thus 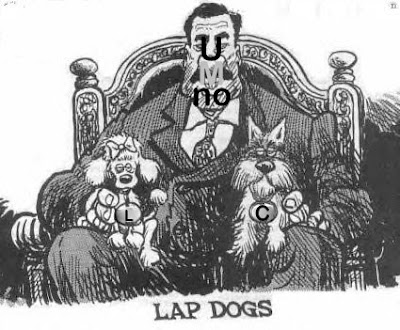 However, I have been reliably informed that women have more use for lap dogs than men. Men are more in favor of lap dancers. On the other hand it must be acknowledged that UMNO is adept in nurturing lap dogs into running dogs, no?

Now that Jibby has got his way and got rid of the thorn Tee Keat and have secured too little puppies on his lap I'd like to throw him a small challenge. Put healthy Chuah back to Health and transport Liow to Transport. Let's see how Liow will handle the PKFZ and his sidekick Wee Ka Siong and the other MCA sharks. Chuah, we will see what you have to say to PERKOSA's Godfather and its Chosen One. Remember you used your tool to great alacrity, use it now to prove that MCA represents the Chinese.  Otherwise get off the lap, go under the table for the crumbs.
Posted by zorro at 3:01 PM

"We will see what you have to say to PERKOSA's Godfather and its Chosen One."

Surely you mean PERKOSONG! Empty vessels make the most noise!!

Speaking of DOGS, we have a barking one in you. You bark at the hills but the hills doesn't crumble. Pity you Senor.

Anon427
Dont pity me. Este perro ladra pero no lamer...in English it means: This dog barks but do not LICK. Comprende UMNO pero?

As far as rakyat is concern, none of the candidates in the elections are qualify to represent the chinese community except maybe Ong Tee Keat. AT least he got the guts to step on corrupted and unethical politicians and greedy tycoons in BN and MCA.
As usual, people who do the right things in Bolehland get bashed left right,centre and top. Poor OTK got booted out by those powerful corrupted politicians and tycoons.On top of that, the chinese community now has a pornstar and a politically death guy reprenting them. How greatla!!!!!!!!
Anyway, with these new “kids” on the block, the final nail was hammered into the coffin. MCA is as good as gone.

This bloody Anon 4:27PM must be a an UMNO paid dog. I say to you Anon 4:27PM, you are nothing but a walking excrement!

MCA GOT A NEW "SITTING DUCK" FOR A PRESIDENT BUT, WITH HIS ASS WELL PROPPED UP BY AN UMNO DICK!
THIS PHANTOM REMOTE CONTROLLER IS THE ACTUAL SHADOW MCA PRESIDENT MAKING ALL THE CALLS...UNFORTUNATELY, A FAKED CHINESE!!!

This new Head of MCA will just be a real trained lapdog why?? should he bark his UMNO master will bring up his sex act. BET IT WILL BE THE BEST LAPDOG UMNO HAS EVER HAD.

Dont belittle your race by calling the MCA stupid.
If they are stupid, so are you.
They are wise in choosing all the three factions in the party.
The only person who is stupid is YOU, stupid..

MCA represents Msian Chinese? MCA is so dated & it got its expired shelf life extended artificially. more like they represent Chinaputras the yellow version of UMNOputras ... come next GE MCA will be finally laid to rest!

now that ah chua is the MseeA head honcho, let's see how he protects the rights of the Chinese. as it is, only 20 per cent of the chinese see MseeA as their saviour, they prefer the DAP. will MseeA continue to cling on to umno's sarong and sell out the chinese or will it demand equal partnership and better rights from umno. time will tell... and on the results, MseeA will be either rendered insignificant or grow stronger.

Now, china dolls may not be harassed and caught frequently! It will be a booming business! Yay!

Nazi UMNO must be very happy to have 2 new 'puppies to play with'.

Dering do....I am a Malaysian first. What are you. If the chinese are fucked up, they are. If you are fucked up, you are. If I am fucked up I am. Be real. What are you? I am Bernard Khoo. Who are you? If you do not dare put a name to dering do or whatever shit you can call yourself you have no right to come to this blog. Begone boy....we are not impressed by your stupidity. Go do your licking somewhere else where you are paid.

We must remember MCA is not Chinese and Chinese is not MCA.

The majority of the Malaysian Chinese are ashamed to be associated with MCA.

The Malaysian Chinese do not wish to have lapdogs like Koh Tsu Koon of Gerakan who lowered his tail behind his back and moved away when Ahmad Ismail publicly humiliate him and tore his picture. What did he do ? Keep quiet because he wants to keep his government position !

What did Ong Tee Keat, Chua Soi Lek and Ong Ka Ting respond when the Chinese foremothers in Malaya were labelled to be flesh traders ?
Accept it without raising a hair !
This goes to show all of these MCA and Gerakan lapdog leaders are more interested in their positions and greed for money.

What did Wee Ka Siong and Chew Mei do in respond to the huniliating insults thrown at their foremothers ? Maybe they had lost their teeth .

Whoever is at the top in MCA will behave at the crack of UMNO music.

The Malaysian Chinese have abandoned them.

hi Bernard, how i wish all the Cina in this land are like you but there are still a lot of Cina walking on the street believe in that useless party MCA.

Sometimes, i really feel like giving them 2 tight slaps.