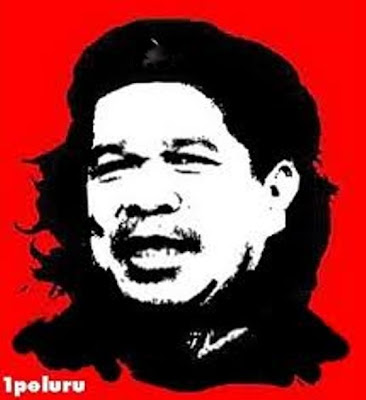 Mohamad, widely known as Mat Sabu, faces a charge under Section 505 of the Penal Code for making a statement liable to lead to public mischief. 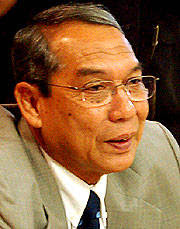 A leaked US Embassy cable carries an explosive charge against former Election Commission (EC) chief Abdul Rashid Abdul Rahman - that he admitted to personally granting citizenship and Malaysian identity cards to over 60,000 foreign migrant workers (predominantly Muslims from Indonesia and Mindanao in the Philippines) in Sabah, in exchange for their votes in state assembly elections to help Umno assume political control over Sabah.

During that decade, Umno granted citizenship and Malaysian identity cards to over 600,000 foreign migrant workers in Sabah. This is attributed to Mahathir’s PROJECT IC.

Mischief or TREASON?
In 2007, then EC Chairman Abdul Rashid Abdul Rahman said that "there is only one regime in this country that is capable of running (the country)."

He let slip today his views on which 'regime' he regards as being capable of running the country, and said those who disagree with him do not realise the 'critical' situation the country is in.

If this is not mischievous, then pigs can climb trees.

Abdul Rashid went on to say that he was on the same wavelength as his friend, senior Umno leader Sanusi Junid, about what the country needs. “If we don't agree, then we are in trouble, because I run the elections," he boasted.

Wan Ahmad (CURRENT Deputy EC)added, "BN has never attacked or put down the EC. That is the difference between PAS, DAP, PKR and BN."

Critics of the EC say that BN has no reason to attack or put down the EC, as the EC is doing BN's work. 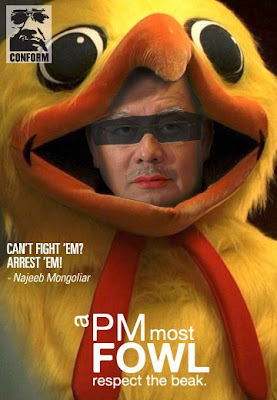 SAKMONGKOLAK47 aka Datuk Ariff fumed: I wouldn’t want the Bangladeshi pump attendant to have the same voting rights as I do. How the elections commission can with impunity insult our intelligence by claiming the latest voters lists are meant for internal circulation is beyond any measure of decency!

ANIL HAS THE LATEST

True Malaysians should start a drive of "Citizenship cleansing"!...those fond having bogus citizenship should be thrown out to the open seas...
Bastards who were traitors to the nation...hang their balls high up to dry!

Just ignore that sleepy flip flop ex-PM what he says. The Malaysian constitution allows people like Mamakutty, who is Muslim, who speak Malay and follow Malay customs, to call himself Malay. To gain power and plunder the country, a lot of people of mixed ethnicity in Umno call themselves Malays so as to endear themselves to the majority Malays.
To get their votes they also play the race and religious card to the hilt. In reality, they have no love or interest in the welfare of the Malays as illustrated by Mamakutty’s ‘Project M’ in Sabah. To win the elections, this guy and his cronies made hundreds of thousands of illegal foreigners ‘bumiputeras’, who will now want an equal share of all the privileges enjoyed by the native Malays. Now the present PM and Umno seem to be doing the same thing in the peninsula. And did the Home Ministry ask the 600,000 newly-granted citizenships in Sabah to write 150-word written tests? Has the ISA been used on those who made this happened? My answer on behalf of Home Minister Kerishammuddin: “No. Never.”

Some of the corrupt traitors who control the federal govt will do anything to remain in power. The reason is simple: first, they do not want to end up like saddam hussein, hiding in a little hole in the ground and ending up dangling on the end of a rope. secondly, they have to milk the country of every sen they can before taking flight to another country to enjoy their ill-gotten gains. If the Pakatan Rakyat manages to take over the federal govt in GE13, we can expect outgoing overseas flights to be fully-booked for some time as these corrupt BN bastards make their getaway. Only the foolish ones will stay to get what is coming to them. Look at Singapore, it left Malaysia and it has become an advanced first world country with excellent infrastructure and public transport with very little corruption. Let's vote out the BN this GE13 and let the Pakatan replace the MACC with highly disciplined officers who will investigate and track down fearlessly all these corrupt BN bastards who have been milking the country's resources all these donkey years. The corrupt BN politicians must be made to realise that they can run but they cannot hide. Hunt them down even if they flee overseas to recover their ill-gotten gains. ..... Hangman Executioner

Going by their mindset and manipulation, guess who gonna be the first to lose out? Yep, the Malaysian-born Malays themselves. For their rights and entitlement would be usurped by these foreign 'citizens' sooner or later. Do I need to state the Mamak case by classic example?

So the cat is out of the bag finally, the grand son of the pariah from Kerala, the shenanigan Mahathir stayed as P.M. using illegal means as alleged all these years.
He is NOT a Malay but an Umno made Malay not Allah made Malay and the reason he insists he is one is so that he can steal in the name of a Malay. After Umno made him a Malay he then hijacked the NEP (Never Enough Policy) and made wrongful use of NEP not only to enrich himself, his children and his cronies. NEP was never set up by Najib's father to make the already very rich Malays to become millionaires or even billionaires. NEP was set up to assist the poor Malays to have a share of the country's economic wealth and for only 30 years. When the grand son of the pariah from Kerala, the shenanigan Mahathir, took over as P.M. the shenanigan, his family, his proxies and his cronies achieved more than the 30% in a matter of few years. He then passed legislation to have NEP (it then became Never Ending Policy) extended for good just so to please the poor Malays and he even had the audacity to claim that the target of 30% set up originally could not be achieved. How could that be when he had said in recent times that everything and anything is possible ? He let the cat out of the bag when he said that knowing the 30% was achieved in the early years as the P.M.. The real reason he claimed that the 30% is not achieved is to make sure the shenanigan , his children, his proxies and his cronies can continue to steal in the name of the Malays. Again let me remind you that he is not a Malay and at best he is a mamak or an Umno made Malay. If Allah wanted him to be a Malay he would have been born as one.
And now that he has stolen almost sufficient he is transforming his descendants into Chinese. Sad to say he has almost achieved that when his multi millionaire or billionaire son married a Chinese and consequently have children who are 50% Chinese and the remaining 50% are shared with Malay and Indian blood.
Therefore they are more Chinese than Malay or Indian and when these children have grand children they are more Chinese than the Malay and the Indian blood put together, that pollution is very tragic indeed for the Chinese !
The pollution should remain the sewage where it rightly belongs.

Stop talking nonsense Uncle Zorro.
Don't bring this and that person to discredit the EC and the government.
Just admit that both your idols Sabo and that back-side lover are going to jail. That PKR will lose big-time in the coming elections.

6P grants Bangla voting rights?
Not surprise from an administration that self-proclaimed as the best democracy nation.

T-shirts bearing 'Che Sabu' image as shown will be a big hit among the young malays looking so long for a local hero.

The police personnel at Bukit Kepong were merely hired by the British colony to safe guard the British interest. Mat Indera was a member of the Communist Malaya which fight the Japanese army during WW II and fight for sovereignty of the country known as Malaya from the colonism of the British. The difference is merely how history has been written and interpreted by diffrent people.

Mamaktir from Kerala, convert to muslim and became a Malay. From there, he became PM because he knew that the malays can be easily manipulated. NEP, special rights all to satlisfied the malays. In the end, all malays funds and institutions were used to benefit himself and his cronies. After 54 years, malays still remain fighting to improve their status. And mamaktir is using Perkasa to give the malays "Ketuanan Melayu". Meaning that you malays, should remain where you are so he can still continue with his corrupt practices.