AM I GETTING A WHIFF OF THE ACRID SMELL OF BUSINESS AS USUAL?

T’was just a passing visit to Penang on my way up north to get my early training as a Buffalo Whisperer. I have been thrilled no end on the positives of Penang under the Pakatan tenure thus far, its cleanliness and the general air of vibrancy! But this time, I came away disturbed. Here is why: 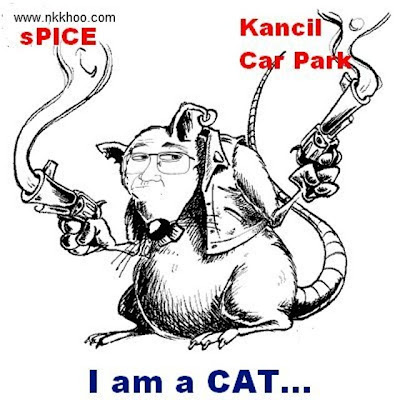 So from RM50 million that the MPPP will have to pay for the proposed convention centre, it has now become just RM11.5 million, which we are told is a “minute sum” for RM300 million worth of facilities.

If this sounds too good to be true, it probably is. And very ‘creative’ too. We are now told the council will save RM25 million in upgrading Pisa and the Aquatics Centre and it will also receive RM13.5 million from the sale of the hotel land. Thus the MPPP would only have to stump up RM11.5 million instead of RM50 million.

State government and senior MPPP officials faced a barrage of questions over the Spice convention centre during a press conference on Tuesday.

You never go wrong with Penang food but somehow this time…….

I am very glad that Zorro finally acknowledge my contribution.

I hope (warn) Zorro could respect Jalur Gemilang and not to fly it upside down.

Otherwise I will make noise in my blog, the way I object to Namewee for insulting Negaraku.

nk,I have never visited your blog and therefore your "I am very glad that Zorro finally acknowledge my contribution" is presumptuous.I acknowledge when it deserves acknowledgement.I am firm about ABU but that does not mean that I have to be partisan to Pakatan no matter what? This post bears witness to what this blog is all about and your cartoon in FB was aptly appropriate and timely. For this I thank you.As to your warning about my inverted flag I am not worried. When I was questioned by the police for putting up a picture of the PDRM logo (a whole year after blogger Penarik Becha originally posted it and was arrested),as seditious, I asked about my inverted flag! DSP Mafuz acknowledged that it was an international distress signal!It is two years since the questioning and I have not been charged yet and I get a warning from you? I take it that you understood the message under my inverted flag.You can do whatever you feel is appropriate. It is your right....just as it is your right not to come to my offensive blog. Thank you again for the cartoon.

Yeah shoot this As*hole nhkhoo. This kind of Hokkien Lang is a disgrace to us Chinese, and yes, I am a Hakka and Fukking proud of it. Why is it that it is mostly you Fukking Hokkien Lang like to saddle up to the dogs and lick their balls!? The biggest balls licker from your clan is that so-called "Professor" Khoo Kay Kim. LGE is doing a great job in Penang and very clean one at that. Go ask the majority of Penangites!

It doesn't make one any less patriotic who hangs a picture of an inverted flag of his country in his blog in time of moral decay than the one who fly it high and upright on his roof. Neither can we fully condemn someone who sing the national anthem in a crude way to drum in a message of injustices to the masses. We are laden with bad officials because we have good citizens who do not, nor care to vote in a change. Just living my one cent worth here.

Zorr, I like your style of a diplomatic Fcuk Back!!!...some assholes, you need not have wait for them to bend forward...it is offered on a plate

Muhyiddin is using the tactic being used by Mahathir regime to keep the malay in the dark ages and make them stupid.

He keep the malay from learning English to suppress them otherwise the malay will rise up to kick him out of UMNO/BN.

The malay themselves must know that English is power and not the Bahasa Malaysia.

Where else can you use BM besides Indonesia. The malay must think and not be like UMNO who only use their mind for sex.

Historical fact which was EXTRACTED from Frank Swettenham's book.

Go to Google, Wikipedia, to get this fact confirmed. Please don't fail to read the extract from page 233 of the book mentioned in the last part of this message.

Appended below is a piece of Historical fact which was EXTRACTED from the book written by Frank Swettenham!! The UMNO ultras as well as the likes of that so called History scholar by the name of KKK (an OCBC) tried to CONCEAL from all of us !

The Chinese are the ones who developed the Malay States to what it is today!


This is documented fact!
BRITISH MALAYA - An Account of the Origin and Progress of British Influence in Malaya " - by Sir Frank Swettenham, K.C.M.G. (1850-1946).
Late Governor of the Straits Colony & High Commissioner for the Federated Malay States. LONDON: John Lane

".......I have said that the protected Malay States depended mainly on the tin mines for their revenue, and it was first care of the Government to foster the industry by every legitimate means. As early as 1882 a French company began to mine tin in the Kinta district of Perak, and has extended its operations to the other States. Since then other Europeans have formed companies for the same purpose; but it was the Chinese who began the work, who have continued it ever since, and whose efforts have succeeded in producing more than half of the world's tin supply.

Their energy and enterprise have made the Malay States what they are today, and it would be impossible to overstate the obligation which the Malay Government and the people are under to these hard-working, capable and law-abiding. They were already the miners and the traders, and more instances the planters and the fishermen, before the white man had found his way to the Peninsula . In all the early days it was Chinese energy and industry which supplied the fund to begin the construction of roads and public works, and to pay all the other costs of administration. Then they will and still they are, the pioneers of mining. They have driven their way into remote jungles, cleared the forests, run all the risks, and often made great gains. They have also paid penalty imposed by an often deadly climate. But the Chinese were not often miners, they were charcoal- burners in the days when they had to do their own smelting; they were wood-cutters, carpenters, and brickmakers; as contractors they constructed nearly all government buildings, most of the roads and bridges, railways and waterworks. They brought all the capital into the country when Europeans feared to take the risks; they were the traders and shopkeepers, and it was their steamers which first opened regular communications between the ports of the colony and the ports of Malay States. They introduced tens of thousands of their countrymen when the one great need was labour to develop the hidden riches of an almost unknown and jungle-covered country, and it is their work, the taxation of the luxuries of they consume and of the pleasures they enjoy, which has provided something like nine-tenths of the revenue. When it is possible to look back upon a successful experiment, it is always of interest to ascertain the determining factors, and how far each affected the result.

The reader should understand at once what is due to Chinese labour and enterprise in the evolution of the Federated Malay States . The part played by the Malay has already been told: it was mainly negative; how far the Government officials, the European planters and the Indian immigrants contributed to the general development of the Country and the position it now occupies will be described in the subsequent chapter............."

It is a fact, for years now, that the security in Johor is below par. One always worries about being way laid and robbed. Instead of solving the problem, the authorities like to pretend that all is safe and well. C'mon, we all know all is not well, hence the constant advice to ladies to never drive alone at night. Some years ago, an IGP denied the police were corrupt and forced a radio DJ to retract what he said over the radio that the police were corrupt. I say man, if only the IGP has owned up to the truth, today the corruption would not have been so wide spread among he police force. Now, everyone also knows... Face the truth instead of sweep it under the carpet.

Everyone is entitle to his/her opinion and at the same time feel strongly about it. No need to agree to disagree in this blog. As of some comments here, sad to note the presence of hakka is best or mine thinking is best only encourage unwanted perception of us. Maybe we still have a long way to learn. Being able to write intelligently and being able to display clear compassion and have true humanity is clearly a different block of ice.

Why should LGE apologise? The truth hurts, badly huh Your Royal Highness?

Cannot understand why nkkhoo is finding trouble with Zorro.

I thought all Barisan Rakyat Bloggers are united to bring down a common enemy?

Both bloggers have high egoes.
Too bad our Malaysian bloggershpere cannot accommodate two big egos at one time.