ANWAR DELIVERS A BOLO PUNCH FOR THE RAKYAT TO FINISH BN WITH A GE13 HAYMAKER. 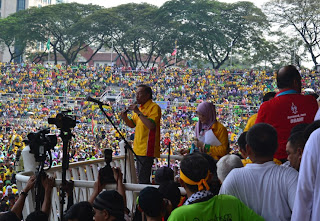 He said:
"Today's peaceful gathering in Kuala Lumpur, and around other venues in the country and abroad, is to show so many of us stand together, with one voice, a voice of change.
Whether to reform elections, provide free elections, to halt Lynas or to defend Felda families.
We want a free and fair elections. You have a vote and I have a vote.  No one should steal our votes. We shall work to defend our votes and will not allow anyone to mock our votes. KL112 says, reform elections now.
Our children are the future, and guaranteeing free education to all Anak Malaysia is a responsibility, not a means to place debt on the young. KL112 says, free education is a right.
Business cannot outweigh environmental safety, which is why protecting the safety of the people of Kuantan cannot be an afterthought. KL112 says, No to Lynas.
Planters and their families are not commodities to be traded as seen in the forced-through public listing of Felda and the financial consequences these people are facing today. KL112 says, decide what’s right for the planters not what is profitable to a small group feeding on the weak.
Today, in Kuala Lumpur’s peaceful assembly and in peaceful assemblies everywhere else, the message is clear, that government cannot be about ignoring the voices of the people.
You, who have showed up are key to the struggle."
NOTE:
A bolo punch is a flashy wide sweeping uppercut that is more about showboating than power. The bolo punch might not even be thrown at all but rather used to distract the opponent so you can hit them with your other hand. When a haymaker punch is delivered…..you are KAPUT! 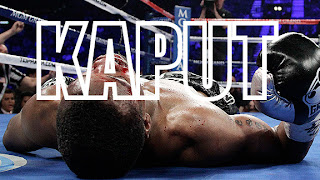 We live in democratic country ..my vote is for BN..

On the 12th Jan. you see the emergence of the colors of the rainbow, so pretty and great! It will be followed by the Wind of Change. It is telling the UMNO/BN bastards, it is time for them to pack up and fcuk off!!!...never to return.

We'll see the majority make the decision / vote first.... Make sure you are eligible to vote rather making useless allegation...
My vote will see who will pack up and f&$@ off....sorry mate...no foul language. Be civilized .

I am for PKR. Guess our vote equalise each other, Anonymous 9.26 !

never have,
never will,
vote for BN.
it is Haram!

I don't want to see anymore UMNO/BN after this.

cannot wait to ABUed my vote....

Hey, seeing as we are playing "Who am I voting for?"

Most affected was Mamakutty, the celup Melayu bastard. He is worried dead shit. The uprising of true malaysians mean, his balls will be roasted, when we see a transfer of power to Pakatan Rakyat!

I do not detest any party or coalition.

I just want change to refresh our country, also to expose any past wrong-doings in the process.

NFC fiasco is not prosecuted, so the change is really needed to put things right.

Najib must surely regret not listening to Mahathir’s advice to hold the election in September. Now, it is too late. No one is listening to him, Mahathir or Umno anymore. Najib is on the defensive rather than offensive because he has no more bullets left to shoot back at his enemies.

MCA is trying their best to do dirty jobs to freak Malaysian out with Islamic country issues. Will Malaysia implement Hudud? Will DAP betray Chinese?

Mad Dog is back again and kick MCA's ass with real facts. Remember, in the coming election, you're not going to vote for Christian State or Islamic State, but welfare state or bankrupt state. Do you know how serious is our nation's corruption? Do you know how bad is our national debt?

Don't let our beloved country down. Change now, save Malaysia.

Based on the rally last Saturday, it is obvious that the caused on the chaos in Bersih 2.0 and 3.0 was due to BN government interference and the Police act unprofessionally.

This is the problem with UMNO & Hishamuddin. They will never say they are wrong. They are not humble enough to admit their m istake and say sorry.Need to teach them a good lesson in GE13 for their arrogrance


If those sewer politicians- incendiary BN don't let out their schizophrenic Kasar agent-provocateurs, Rempits and Men-in-Blue without nametags, nothing will happen! They were the trouble-makers at Bersih 3.0, remember?

Now I know why Blues Gang has not performed on RTM or TV3 programs.

PAS Kedah bolo punched itself to lose chinese votes. In Kedah, Umno is a lesser evil to chinese now.