THE CHARMED AND THE COMPULSIVE LIAR. 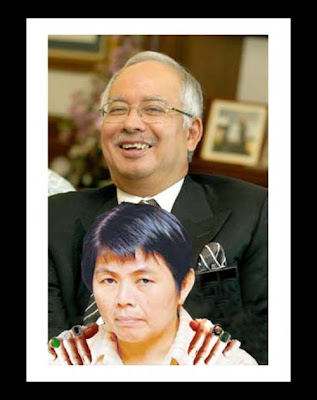 CHARMED but considered the most hated female in Malaysia.
( "look at them rings on the charmers fingers and the posture of those hands....nothing compared to Pak Lah's gesture on Michelle Yeoh" shrieked HANTU. He is still hanging around....he got wind that I was house-bound since Monday.) 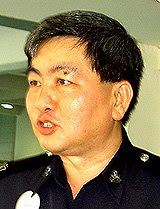 These two damn chinese....they are a disgrace to our race.
Posted by zorro at 12:23 PM

Since olden day China till WWII Japanese Occupation & until present day, some Chinese are proned to "sell" their own race mainly due to their greed.
In fact the biggest traitors are from a Chinese Party that claimed to represent the Chinese Malaysian.

They don't speak like Chinese, they don't think like Chinese...but, they look Chinese! puiiiih!
In the good old days, the emperor would have hung these two traitors by the balls up a flag pole..ooops! only one can lah. What shall we do to the balless one? Make her a lifetime whore....

Seems like a large number of bodysnatched humans of all colors & creeds operating in Malaysia under the aegis of Barisan Najis. What about subhumans like Anselm Fernandes (the DPP instructed to give RPK a hard time by applying to transfer his case from the Magistrate to the Sessions Court)? Or Tonny Lunggan from the Brickfields Balai Polis, who supposedly investigated the Altantuya murder (but conveniently forgot to question Musa Safri, Rosmah Mansor & Najib Razak) & later helped disappear P.I. Balasubramaniam? What about Augustine Paul, for that matter? Still creeping around in judge's costume, doing the bidding of his political masters. Then, of course, we have the unsavory likes of Tun Majid Hamzah, assigned as chief prosecutor in the Altantuya case, who has done everything in his power to thwart the course of justice, in collaboration with one of the weakest judges in recent memory, Zaki Md Yasin? This, people, is the power of Barisan Najis - they have the reverse Midas Touch, everything they touch turns to shit, especially humans. So if a chubby guy with pink lips approaches you & tries to shake your hand, just kick him in the groin & run for dear life!

Yes, they are absolute disgrace to the WHOLE HUMAN RACE... the race of Adam!

Or as the evolutionists prefer, the race of developed monkeys. This being the case, their despicable conducts are excusable... we don't expect offspring of monkeys to any morality or integrity.

Both of this moron have contracted "mad cow disease" from Botak Albar. Incoherent and useless reply to question are the most common symptom. Given time both will have receding hair line and will start scratching their head compulsively and leaking brain matter. stupidity and senility will then set in, ultimately both of them will be unable to enjoy their ill gotten wealth...Good riddance.

This is the precise problem that the Chinese officers currently serving in PDRM are either lack of balls or brains. A far cry from days gone by when the officers of all races were professional and can take on the challenges with dignity.

These 2 damn chinese...both their parents should disown them and all thier friends should abandon them cos anyone who is associated with them will be considered as traitors also..these 2 traitors are even worse than the mca dogs.

I bet they will even sell their mother if the price is right.

That low class prostitute dare not go back to jelapang...leaving her family members to face the sh.t

Looks like a perfect couple....i mean the two Chinese la..

Kapcai, if you have diagnosed me as being sick, thanks for the revelation. Can you help? If you cannot....then just shut up and just go help Hee and Gan. They are in more need of your expertise...whatever it is....like blowing hot air. Are u sure you are ok? I rode a kapcai in my younger days, and I can feel it is not right.

Kapcai = Mat Rempit = UMNO youth. Ladies and gentlemen it's the new theory of evolution. The origin of UMNO Youth is MAT REMPIT ( after further head banging session on a few cars windscreen that is ). Guess what? Today is the birthday of Charles Darwin. Coincident??? I think not!!! LOL.

Is this about Chinese or is it about Malaysia?

Why all this crap about selling Chinese got to do with the Perak troubles?

Why is first, Malaysia or about Chinese race? Uncle Zorro, who is actually racist here?

It is ok to condemn and criticise these two persons, but to pull in the race factor (example Chinese traitor) is not what many Malaysians would like to see.

We shouldn't be so racist in our comments. We should look from the view that to be a proud and honourable Malaysian we shouldnt be doing such unethical things like betrayal and lying.

Thank you for your comment. These two happen to be Chinese. I am particularly hard on Chinese who make those missteps. You are free to label me a racist. That is your choice. For a Chinese (for that matter any race) who say "My country, right or wrong". Now that is racism. If I embark on insulting only my malay brothers and sisters, that is racism. As a chinese, when I whack my own kind, it is usually called castigating.

YES ! saya, a chinese too, have the RIGHT to castigate our own kind = NO
racism lah !!


Special press statement by the Sultan of Selangor


AFFIRMATION REGARDING
THE POLITICAL TURMOIL IN PERAK DARUL RIDZUAN
Political developments, instances of street demonstrations and disputes between various parties, relating to the recent appointment of the new Perak state government, to the extent of displaying rudeness to the HRH Paduka Seri Sultan Perak, Sultan Azlan Shah, have saddened and disappointed me.

The fact that HRH Paduka Seri Sultan Perak is my uncle (Sultan Azlan Shah’s father is my grandmother’s brother) adds to such sentiment.

In fact, both Royal families of these two states have a longstanding historical relationship that, till today remains strong as ever.

HRH Paduka Seri Sultan Azlan Shah whom I know is a very knowledgeable person with vast experiences in the legal and judiciary, appropriate with His Royal Highness’ former position as the Lord President of the Supreme Court (as it was then called).

His Royal Highness and the Royal family also have distinguished educational credentials and qualifications and further are always sensitive to the needs of the people so much so that most of His Royal Highness’ determinations were all based on a knowledge culture, holistic (Syumul) considerations and consensus (Musyawarah) principle among the learned and experts suitable to them in any relevant issue.

What we have seen and are still seeing for the past week in Perak has prompted a concern among those who care so much for their religion, race, country, stability, well-being, civilisation, security and our future together.

Ignorance of the provisions of the State and Federal laws, extreme partiality for certain quarters, loss of self control when emotions were disturbed, arrogance which blinded them from the rights and powers of HRH Paduka Seri Sultan Perak, the rudeness as subjects of the State of Perak and citizens of Malaysia, and their easiness in being influenced by the “mob” culture, are very disheartening and deeply embarrassing.

In light of this occurrence, a Malay proverb goes, “barulah kita kenal siapa kaca, siapa permata” (Now we know which is glass, which is diamond).

In fact, now we could understand the truth inside those people who “marahkan nyamuk, kelambu dibakar” (angry at the mosquitoes, but the net is burnt).

I hereby wish to advise with the utmost sincerity by taking into consideration the future of the religion, Malaysian nation and our beloved country.

Please do not be misled by actions and behaviours that will only disgrace our integrity, invite high risks to our process of progress and eradicate the foundations of national sovereignty through the display of rudeness, treachery, arrogance, ignorance in knowledge and lust for power.

The increasingly worrying situation leading towards economic recession, both at the global and regional levels, warrants us to concretize our unity though there are adversities in our viewpoints.

These are times when we can retract statements that were wrongly said, but these are precarious times where wrongful actions can lead to disastrous consequences.

To those who have repeatedly challenged the rights, roles, positions and prerogatives under the Federal Constitution, including the roles of the institution or Rulers, my advice is for the people to think carefully and evaluate deeply the consequences before taking any actions.

I pray to ALLAH the Almighty to place us in His loving care, and continue to shower us with a clear heart, peaceful soul, wiser thoughts, easier path, the right actions, harmonious relationship and strong self believe to manage the country together in facing future progress of our nation.

Both are rare species and should be protected or else we will not be able to find one of their caliber.Ah Guan and Ah Foong should be husband and wife !

remember what your oldman tells you zorro.

good son will never be a cop/soldier.

RPK has posted a Malay Mail article on his Corridors of Power. In that article, there is clear mention of 'RPK's support of Perak’s Sultan Azlan Shah'.

I do not think RPK would have put that up on MT, if he did not agree with it himself.

1) The Sultan really is innocent and did not accept bribes and was "not" forced into the decision?

2) A decision he made with the best interest of the people of Perak in mind?

Will RPK answer the 2 questions above specifically in time or avoid it forever? If he does not know, why post that article on MT?

I am ashamed that these two persons who happen to be from the same ethnic group as me, have not adhered to righteous Confucian principles which are universally accepted as being morally correct. If they had been from the Indian community, I would have said that they have shamed their ancient culture which principally is based on a fight against the evil forces and temptation which would lead one away from Brahma. If they had been Malays, I would have said they brought contempt to their culture and especially their Islamic beliefs. Its not racist to factually present the the morality of a particular community's culture and how that is applied to a person's bbehaviour in public and responsibilty to one's neighbours (which incidentally means society at large).

Bernard, do join us for tea and coffee more often. ;)