MONKEYS ARE KNOWN TO GRAB AT ANYTHING. THIS ONE NO DIFFERENT. 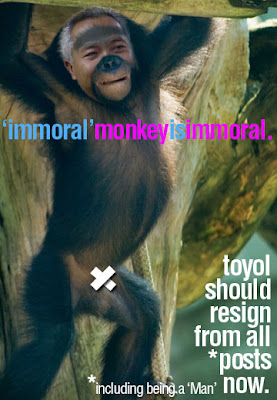 HANTU smugly dropped this and flapped away. Nothing sensational really. But I will publish it or somebody will give me his cold "wing".

It seems Prime Minister in waiting summoned Khir Toyo from his weekly whitening treatment (notice the irregular spread of pigmentation?). He was told to just shut up about Eli Wong. He was told that in baiting for votes he is forcing another by-elections which Barisan cannot afford to lose but will inevitagly lose. He was even asked if he was behind the offering of the photos? "You have disgracefully lost our premier state and instead of repenting for your sins, you dare put UMNO at risk again. I will see to it myself thath our people will not vote you in. Now get lost and Rosmah wants to have a few words with you;" chided an irrate DPM.

Marina M has THIS to say

A SakmongkolAK47 reader said this after the debate:

I wonder how many umno members think like you. If umno leaders think like you, umno will not be in the state they are in today. I agree with everything you said about KT. He is the kind of leader that will be the biggest obstacle to the true advancement of the Malays. He is a racist, selfish, narrow-minded, power crazy opportunist. His true colors has shown through when he is in desperation. I appeal to you n like minded umno members to stop this maniac from further destroying the future of Malays and our beautiful country.

the Malaysian Insider on TOYO:

"This statement is rich coming from Khir. He is the last person in Malaysia who should be pontificating about morality. The state government he led was mired in countless allegations of corruption. The stench of some of those accusations continue to follow him".
Posted by zorro at 6:00 PM

Is this on the level or do we have to take it with a pinch of salt?

Through "Devine" intervention, UMNO, its Leaders & their Lapdogs are now "Outdoing & Destroying" each other with their "Power, Greed & Henious Crimes".

Our prayers to God Almighty seeking "Truth, Justice, Freedom & Equality" will be answered.

Every new day will be another "New Revelation" to reveal the "Truth" in its Self Destruct motion towards its "Demise".

in a live television debate, this came out from his foaming mouth:-

"non muslims cannot be at the same level as muslims"

Hail Toyo. No different from the Nazis, aint it. For a few votes more, this Javanese will even sell his siblings away.

If I am the DPM I would do all that plus spit on Toyol's face.

Beware that troublemaker and shit stirrer. Anyway, his Maker intimated to me that Toyol will come back as a deaf mute in his next life.

To me the more umno try to do, the more worse it turn out for them.
So it's like do also die, don't do also die. So how?

Khir Toyo's remarks on Eli's public morality was absurd. What is wrong with sleeping in a sarong at her own bedroom? It is the lust in his mind that makes him "Dirt Ayo".

Botox, whitening agents... what next? Is this Toyol on the way to becoming Malaysia's Wacko Jacko?

I would like to hear it from that Nazi putting it down to tempe for any surgical restructuring that occurs to his face.

The biggest regret i have is not getting the name of the watchmaker in switzerland where this monkey had the cheek to register himself as a
buyer.Word has it the collection is above 30mil.

I think the over-botoxed monkey is now PR greatest weapon against BN. It still can't get over losing his pants in the last general election.

when one sultan rejected pm choice of mb , it was unconstitutional so they 'natanged NATANGKAN' the sultan
NOW they " daulat tuanku DAULAT TUANKU ' !! @#$%^&*&^%$#@ !!

Thank you for putting up my comment. Of all the revolting umno leaders,and there are MANY, KT is one that will make my blood boil everytime I read abt his antics. If he gets voted in, umno is doomed. The umno guys who voted him must be blind...blinded by $$$$.

Zorro, this toyol guy looks more like a pig than a monkey. Can anyone do a caricature of of this pig.

when teresa sue toyo, she has to be ISAed for protecion.
when ronnie liu sue Toyo, he was charged by the police.
when khalid sue Toyo, he is now considered a corrupt by the MACC (Malaysian Agency for Cows and Cars, a beauty from Kit Siang).
When you guys try to be too funny, you will be jailed for contempt of demi-god of Selangor by a toyo-sanctioned judge. Think its irrelevant? ask the Irrelevant judge, ok.

Better keep quiet else worse may befall me, like being C4ed.

Please don't be too hard on si-Toyol, we need him in Umno,and Umno needs him as they lack capable leaders in Umno. With such stupid leaders, then only Umno will lose in the coming 13th election,the people are simply disgusted with such incompentent and dispicable Umno idiots, the more the merrier it will be ...the doom is near for Umno/BN.

Toyol is the greatest insult to mankind. I wont even call him a monkey. Monkeys have more respect than him. I only hope the people of Selangor will wipe him off the political map in the next election. Stupid idiot, moron, mutt, cow dung, shit, dungu, bodoh.

Mr.Khoo!
There is a drug called "ice", which is colorless,odorless,slightly sweet.
When it is slipped into a drink {hot or cold}& drunk,
it hits your brain and makes you happy.
However, this "happy" state makes you an automaton - in that when someone says cry, you will cry and laugh at the same time.
When someone says jump, you will be jumping.
The drug will remain in your system for less than 24 hrs and then is flushed out automatically.
When you awake you will not remember what you did or what was done to you.
When you are then reminded of what you did,
you will be amazed,shocked.... at your own behaviour!
When you are presented with "documentary" proof of your behaviour - YOU ARE BURIED!
As I always say :
RES IPSA LOQUITOR
Godspeed!

I heard so much rumours about his relationship with Tanjung Sepat, Selangor and his wife's car, why there appears to be case against him on the two issues ?