NO MIRACLES NEEDED.....JUST AN X WHERE IT MATTERS!

“Malaysia will become a fully indebted nation before the end of the decade at the current rate of massive borrowing and irresponsible spending by the BN Government” declared the Malaysian Institute of Economic Research (MIER). 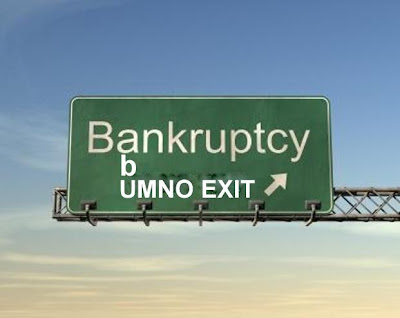 I usually do not write about such things on the eve of Hari Raya or any of our festivals. But there comes a time when raw reality supersedes sentimentality. Over a Chinese New Year visitation I heard this within earshot. This 5 year old kid on discovering the contents of his angpow told his 7 year old sister: “That aunty’s angpow only 1 ringgit.” I snatched the red packet from Benjy and said, “I know a very poor boy who would value this 1 ringgit to share with his younger sister.” He ran to his mother to complain and the latter gave me a look! So what? Later, I learnt from the father Stanley my former student that Benjy was disciplined appropriately in the presence of the mother and sister. BTW Benjy emails me from Melbourne more regularly than my two kids! Howzat!

The beautiful thing about this balik kampong phenomenon is that irrespective of which festival, siblings take the opportunity to head for home-base. What better opportunity to impress on those still unimpressed that this is not a tale but a sorry fact that has to be put on the table. This is an opportunity to level with our doubting parents or siblings. Here are the bare facts from MIER no less that Malaysia will Go Bankrupt By 2019 With Debt To GDP Ratio Of 100%:

The Federal government debt to GDP (Gross Domestic Product) ratio has increased yearly from 53.1% in 2010, 53.8% in 2011 and 54.8% in 2012. This is extremely alarming and nearly touching the national debt ceiling of 55%. According to Malaysian Institute of Economic Research (MIER) fellow Mohd Ariff Abdul Kareem, if the Federal Government continues to borrow at the current rate, our debt to GDP ratio will be 100% of GDP by 2019! In absolute terms, Federal Government debt rose by 71% in 4 years to RM456 billion at end 2011 from RM266 billion at end 2007. At the same rate of expansion, our national debt will be RM780 billion by 2016, and RM1.3 trillion by 2020. Mohd Ariff also noted that what is more worrying is that our rate of borrowing is far outpacing our economic growth, so much so that he was quoted as saying, "If nothing is done to reverse the current trends in government expenditures and revenues, extrapolation suggests that Malaysia's national debt will explode to 100 per cent of GDP by 2019." This is extremely dangerous, and even more disastrous when coupled with statistics from Bank Negara's Annual Report 2010, which revealed that Malaysia's household debt at the end of 2010 was RM 581 billion or 76% of GDP, thus giving us the dubious honour of having the second-highest level of household debt in Asia, after South Korea. In addition, the Malaysian household debt service ratio stood at 47.8 per cent in 2010, meaning that nearly half of the average family's income goes to repaying debts. Not only are Malaysians debt-laden, cost of goods are also skyrocketing while income and salaries have stagnated. While infant milk powder has risen by nearly 50% in recent times, other basic commodities have also gone up by leaps and bounds, such as: 1. Sugar: RM1.45/kg (Jan 2010) to RM2.30 (May 2011) - 58% in 18 months. 2. Eggs: B grade RM9/30eggs (sept 2010) RM10/30eggs (now). 3. Electricity tariff: average increase of 7.12% in June 2011. 4. The tarik and kopi susu: increase RM0.10 to RM0.20 (9.1% to 18.2%. 5. Gardenia bread: 5%-14% hike (2011). 6. Service tax increase 1%: additional RM720 million in taxes to Federal Government. 7. Onions: price up 17% (Dec 2010). 8. Milo: up 5% 1st half 2011; 4% 2nd half 2011. 9. Nescafe: price went up further 6% in 2nd half 2011, when price is already >RM20 per 300gm 10. Favorite food items like roti canai, char koay teow and nasi kandar come in smaller portions for the same price. In contrast, Pakatan Rakyat-managed states have successfully managed their finances and not overburdened the people with debts. In fact, Penang managed to reduce state debt from RM630 million at 8 March 2008 to only RM30 million as at end of October 2011. This represents a debt reduction of 95% or RM600 million, which is the highest debt reduction of any state in Malaysia's history! Clearly, Malaysians who wish to have a better life for themselves and their future generations must make a choice between a government that is spendthrift and that borrows irresponsibly without being able to make the pie grow bigger, or a government that is prudent and transparent that will put the concerns of the rakyat first.

Probably a re-read HERE might help when you discuss this with your family over the festivities.

We don’t expect you to work miracles because it is not necessary to be a miracle worker.

JUST PUT AN X FOR PAKATAN TO ENSURE THE EXIT OF UMNO/BN. 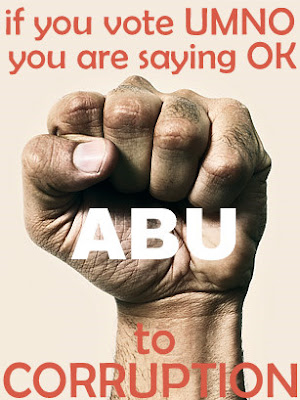 COMING INTO MUAR THIS MORNING WAS A BREEZE.

SELAMAT HARI RAYA TO ALL MY MUSLIM FRIENDS, ESPECIALLY THOSE WHO ARE OVERSEAS.

My dear Zorro. you overlook to include the mountain of debts hidden under contingent liabilities by the scumbags and parasites.
They are now trying to fool all Malaysians that the country's economy is doing well despite all the problems Europe. If they are doing so well they should be repaying the huge loans they have taken
but instead they are still borrowing to survive.
Face the truth and shame on the devil in particular the grand son of the pariah form Kerala, the shenanigan Mahathir who is responsible who the dire situation Malaysia is facing today. One other thing, do you know that Malaysia is know rated the same as Italy and Spain on the verge of bankruptcy !

They can steal more with Amendment Sect 114A Evidence Act 1950(which should not have been there in the first place!) to silence you, have you go through time-consuming inconveniences like what they are deliberately doing to those Candlelight Vigiliers who are being made to appear in court every few months for years now. That's how evil and arrogant this Najib regime is!

Think they care for the Rakyat? They only know how to tell the Rakyat - be grateful to BN/UMNO and they are spending our tax-money as if there's no tomorrow! How easy they forget - Rakyat Yang Raja!

But now they are begging, because they know we are fed-up to the teeth and we SHALL dump them! - 54 years is far too long, we have been bullied and nation's coffer is scrapping bottom. BN/UMNO must GO!

Don forget all the BAILOUTS!!! This is not yet costed into official figures!

So much of the nation's wealth has been squirrelled away in offshore banks around the world. I hope PKR if it wins Putrajaya can evoke a repatriation bill to get it back to Malaysia where it can do good for the people here.