FRIDAY GUEST BLOGGER: A PIG IS A PIG AND NEVER CAN A TIGER BE.

In a zoo in California, a mother tiger gave birth to a rare set of triple tiger cubs. Unfortunately, due to complications in the pregnancy, the cubs were born prematurely and due to their tiny size, died shortly after birth.

The mother tiger started to decline in health, although physically she was fine. The veterinarians felt that the loss of her litter had caused the tigress to fall into a depression. The doctors decided that if the tigress could surrogate another mother's cubs, perhaps she would improve.

After checking with many other zoos across the country, the depressing news was that there were no tiger cubs of the right age to introduce to the mourning mother. The veterinarians decided to try something that had never been tried in a zoo environment. Sometimes a mother of one species will take on the care of a different species. The only "orphans" that could be found quickly were a litter of wiener pigs. The zoo keepers and vets wrapped the piglets in tiger skin and placed the babies around the mother tiger. 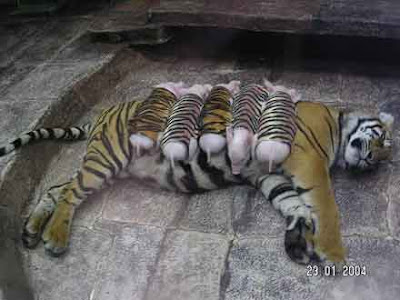 THAT WAS IN CALIFORNIA…..OVER NOW TO MALAYSIA

This Ridzuan Tee thinks very hard and try very hard to imitate being a Malay.He is a fool to think that he is a Malay Muslim,being born a Chinese.But he is ashamed to be called a Chinese Muslim.All the garbage he writes in his weekly column about the other races makes him look like a moron.He has shamed his parents and ancestors.He should be disowned and discarded like bad garbage.

Celup Melayu can get 30% discount ?

His hosting of Forum Perdana on RTM1 requires him to be a celup ?

He dislike Chinese as kiasu like having big tomb after death according to his article in Utusan.

When PAS in power, will he switch aliance to stay on TV ?

Ah Tee was inspired by the Mamak who went on to become a PM?

Ridhuan Tee should focus on how to combat corruption in Umno.

Anyway, Tanda Putera is a BN cheap propaganda film! The real culprits of May13 are the UMNgok itself! PLEASE MY FELLOW FRIENDS OF MALAYSIANS, it's not caused Malay, not Chinese, not Indian. Think again. Sila renung & fikirkan. It's ALL caused by the top & cruel group of ppl of BN politicians that splitting our Malaysians so that they can stay in power & money. It's all planned by a group of ppl of umngok in harun house (MB of Selangor) & razak in 13 May1969.

Our father, Tunku Abdul Rahman has faught so hard to bring us Merdeka. In a very rare video in 1980s, he explained everything. All this has been purposely planned & created by UMNO and to bring him down! What BN afraid of now is the MORE we as Malay, Chinese, Indian, Kadazan, Iban UNITE, they will lose power, worse to say, everthing! In this movie, they purposely to separate us again my fellow Malaysians. For those who support & believe this movie, go on. True Malaysians already seen how they TWISTED the whole story of BERSIH peace gathering, making the video & news that we the Rakyat are creating chaos! It's proven. Again, i urge my fellow Malay, Chinese, Indian and whole Malaysians to UNITE to get rid of this corrupted gomen & politicians!

Luckily the devastated mother had totally lost her appetite...otherwise all her adopted children would have been great snacks.....

From my experience with the MCA and the people whom I had worked with in the party, I can only say that most of them (from Lee San Choon, Koon Swan, Liong Sik, Kim Sai, Ka Ting, Tee Keat and all the other people at federal and state level) KNOW that the Chinese in Malaysia are not ever going to be in a position to influence the direction of how the country is to be governed, i.e. to say anything that affects MAJOR policies.

There’s just this denial syndrome that non-Umno parties are just there for window-dressing; so the next best thing to do is scoop up the scraps Umno throws their way... except Taib and PBB who take the lion’s share as well!

From the many, many sessions of central committee meetings and brainstorming, seminars, courses, etc, the one main thing to emerge is to only defend or safeguard Chinese position in education and economic sectors ... we’re down to TAR College, Utar and Chinese business interests which, sad to say, …is playing to Umno whims and patronage… macam crony business.

The rest in the SME (small and medium industries) can pray to God and hope to survive and are at the mercy of the idiots who run the bureaucracy.

There is NO hope ever under Umno that Chinese position will improve because the OVERRIDING philosophy since May 13 is that non-Malays/Muslims are to be assimilated (much like the Borg in Star Trek).

That is why the MCA is always fighting ghosts; Umno is always lying, even when the truth is exposed about their true intention.

MCA people know this and pretend to fight for Chinese when they know they are only protecting their personal interests/financial gain, through Umno patronage.

The BN was never a coalition; it is and always has been an illusion created by Umno to present an imaginary front to the world that the people represented by the various races and parties support them.

[Our elites] cheat and bribe their way in elections and steal what they can, when they can, with impunity. They not only do that, they find ways to criminalise the victims!! That takes them 10 levels above the Somali pirates!

To cut a long story short, and to answer your question about going back, even if Penang booms further under the DAP, the short answer is NO; I’ve burnt my bridges … It’s just too hard to ever hope that they will ever understand the meaning of a civil society, let alone try to forge one in the years ahead, even if PKR takes over Putrajaya... my prediction is that the worst is yet to come. I hope I’ll be proven wrong in my lifetime.

Hudud has always been used as a weapon to frighten the Chinese and some extremists in PAS may have been used by Umno/Perkasa to split PKR, so the MCA is just playing the propaganda game to try to win back some Chinese votes. Umno, on the other hand, is using [the Malay fear of] Chinese political power to frighten the Malays.

If he is in Sri Lanka he'll claim to be Singhalese and Buddhist. That would be pretty funny isn't it? A yellow skin Singhalese with mata sepet. LoL.

Try to be empathetic why this tee guy is working overtime to be accepted as a malay,not a chinese as he was born.Actually he's very smart,he knows it's dead end to the future for a non-malay in 20-30 years to come.Take the cue from the illegal migrants Bangla,Pakis,Indon,Viets, Pinos...they are also behaving like malays now for obvious advantage reasons.We shd follow their example to have a good future

Ah Tee, you are sick, ashamed of your DNA and embarrassing yourself, no one else!

Take my advice, go travel and do the Old China Silk Route experience like I did, will open your eyes and do you alot of good. You'll be amazed to find there are more Muslims of Chinese origin in China than there are Muslims in whole of Malaysia!