Mat Zain, former senior police officer, states there is no other body that is qualified to adjudicate on the present attorney-general than a tribunal. 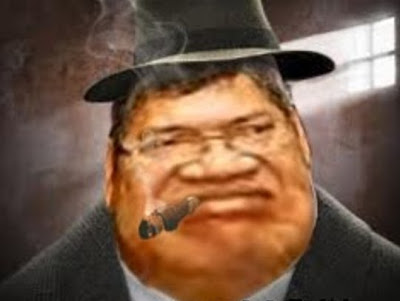 He said Najib had last March rejected the calls for a tribunal although many credible exposures had been made over Gani’s misconduct in the public domain.

“I placed my trust on the PM to reconsider that stand. If Najib was willing to have an RCI to investigate the influx of illegal immigrants into Sabah, then he should consider the wishes of the people in the peninsula who had asked many times for a tribunal to be formed against Gani for the alleged misconduct,” he said.

Mat Zain Ibrahim, in his open letter sent to Najib two days ago, also revealed another possible misconduct by Gani with regard to documents relating to Anti-Corruption Agency (ACA) investigations into the bank accounts of former Malacca chief minister Rahim Tamby Chik.

I always thought that nobody is invincible and untouchable except the Almighty! The question that invariably accompanies this would be: What “hold” has the AG on Jib? Something to ponder over the weekend?
Posted by zorro at 3:08 PM

He behaves like he i at par with Allah, he is at the right hand of Allah. No body, not even Allah can and ill touch him so who is Najib especially Najib's involvement in the C4 is in his pocket.

Mahathir left a lasting legacy,and that is to hold all to ransom b'cos one never knows when one needs to use it!The AG has obviously learnt well,hence he's still very much around and kicking and nobody,not even the PM can touch him!He's not about to go down alone....not anytime soon!

Those who put out their views through blog always feel that the the new media has given them a sophisticated forum to to put their views to thew people. Yes in that sense we have become journalist and taken over some of the work of the media.

But at the same time our Civil servants and politicians too have also become more sophisticated in their use of the forms of democracy to under mine the substance of democracy. In a sense waht we see today is the Reverse Rule of Law being used to keep the opposition at bay and in the courts. When you say that prices have gone up out come the One Malaysia Shops and a RM40 Million grant to Mydin to reduce prices. When you complain get the Foreign Consusltant to twist your mind.Then you have the mother of all carrot- BRIM. So you see the people cannot win. Once you give your vote you have surrendered your rights to the Majority party in a winner take all grab.

The 6th PM was DOA (dead on arrival).
That girl he din know sank him like shit. Bodowi knows all

This is the devil you know.


This motherfcuker AG has got Ajib by the balls!!...obviously, that includes all the corrupted UMNO cronies. This is the most powerful weapon he has to repulse any smart asses from the evil UMNO establishment to have any "funny ideas" to put him on the dock... to answer all his misdeeds. No chance this happening in the near future. Let us put Pakatan into Putrajaya, we will then see real changes...this bastard will be on the next plane to Timbuktu.

I am very tired of so much propaganda on loval TV.

Why tell people how to pilih?