Over Macallan and some sushi at the Wharf last night, Hantu said that I have to get my facts right. He chastised that Bloggers who do not get their facts right are sham. He said that Bloggers who have a price are mercenaries. Between stacato belchings he asked me if I was a paid Blogger? I took a swipe at him but the devil in him knew what was coming and thus there was no contact. Dang, I told him I would not mind if some kind soul can put gas into my guzzling tanker and spill some beers into my empty tankard. That could help and that is the only help I need.

remember I cracked into two my MCA live membership card, at Edward Lees final ceremah on 7 March? I am memberless now and shall remain such. I will always support THE CAUSE....and the cause will vary as the scenario changes. For now the Cause, is a change of Government.

To get back Hantu's tantrums. I asked him what facts did I get wrong. His rejoinder: You bloggers were bitching that the immigration department deleted Altantuya's entry into the country. I shot back that it was imperative that she came trough immigration. She was C4ed here wasn't she. The days of the magic carpet is over. It is so easy to delete a computer data.......for a price, no?

"Think out of the box for a change.....she did not come thru immigration.....this is how she came into the country, you idiots"....and he flew off but not without that awful wasabe belch...... 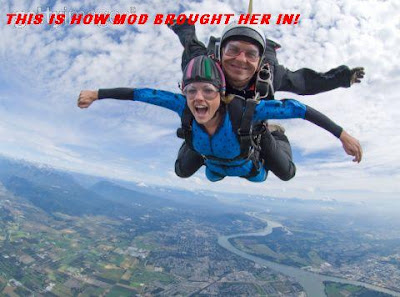 features invariably change in this type of aerial situation but you know who is who, ya?


Dang! The old bird could be right......after all Altantuya had powerful friends (lovers?) in the Ministry of Defence, (MOD), mah!!!!!! YES WE GOT TO GET OUR FACTS RIGHT.....DON'T SHOOT AND THEN DECIDE TO AIM.

Can we back it up a little here?! Weren't there two cousins of the deceased that came into this country with her, and were detained by the immigration for failing to have entry records?

But zorro you forget, 2 other people came with her who went through customs and this was said so by the 2 friends of Altantuya or did they all fly in by private jet to a private field?