SHE IS UPSET BUT STILL SHE WISHES ALL SELAMAT HARI RAYA FROM PETE AND HER FAMILY. 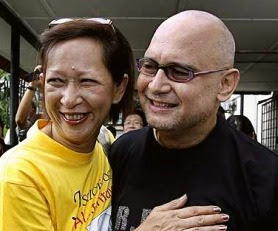 I called Marina at 9:15pm and she said that she had arrived in Taiping. "How are things?" she asked. "Gus says that Haris and I have put him in a spot.....he is getting calls about the T-shirts as far away as Kota Kinabalu." I replied. "How are you coping?" I asked pretending to be cheerful.
"I am upset, Bernard," she said. I know why. Read her posting:

I just read my husband's article on www. malaysia-today.net No Holds Barred and was extremely upset and it made my heart so heavy reading what Pet wrote: “It costs RM8 to feed a dog according to the Malay Mail survey and only RM4.50 to feed ISA detainees.....

"I feed my cats and fish premium food such as science diet and would never dream of feeding my pets the food that we are fed here. I actually stopped eating the food here after the first couple of days because it gave me diarrhea. A couple of nights ago I vomitted after eating the food and now I cannot even stand the sight or smell of the trays that they sent to our cell twice a day. I now survive on dates and plain bread....."

Umno preparing food for 200,000 people for their Open House for the 1st day of Hari Raya and what would the cost be per head?

How can Muslims of high authority use this unIslamic law, the ISA, on people during the month of Ramadan (the holy month for Muslims), put them under such barbaric conditions and rehabilitate them according to their perverted standards. Where is the compassion, where is the humanity and most important of all, where is the love of mankind that Islam enjoins its followers to observe? Can someone please explain all this to me? I am really very confused. All I can see is hypocrisy and man's inhumanity to man, not compassion, consideration and common decency.

Jakim is coming up with an Islamic rehabilitation program for my husband, it is a joke. Did they even understand what Pet wrote in the first place since it is in English? What he wrote was not anti-Islam. The use of the ISA on Pet is all politically motivated. He has taken on powerful people and since the Prime Minister is weak, he is unable to use the powers that are available to bring justice. This is the tragedy of our country. Let us work towards a change in government, one that is committed to abolishing the despicable ISA. We want Rule of Law not Rule by ISA.

I am in Kamunting today, staying the night so that I can be first in line to get into the prison. It pains the grandchildren, children and I to be without Pet on Hari Raya. We miss him and the joy that he brings to us each day.

Thanks for your support and prayers my family have received. We must continue this fight to free Pet and his friends under detention in Kamunting. "Selamat Hari Raya, Maaf, Zahir dan Batin."

Love from Pet and Family

OVER THIS FOOD THING, SOMEBODY MAY THROW A MOLOTOV COCKTAIL INTO PETE'S CELL.....YOU JUST CANNOT DISCOUNT THE POSSIBILITY.....THEY WILL CLUTCH AT ANY STRAW.....NOW THAT THE SHIP IS SINKING AND THE CREW IS DROWNING.

I AM DEMANDING FROM HAMID-ALL-BLURRED THAT YOU PROVIDE RPK WITH ALL THE PROTECTION HE DESERVES SINCE YOU PUT HIM IN THERE TO PROTECT HIM.

I have translated a part of RPK's exclusive interview recently by a Chinese magazine.

This is my little contribution to help creating awareness when RPK spoke to the Chinese community. He is consistent, precise, and straight to the point.

There are all in all 8 parts, I just did the first part.

Please, help to spread the English and Chinese versions to your friends, let them know how RPK think, what he has done, and what we should do to for him.

Create the awareness, we are still small compare to 27 million population in this country. If anyone can translate to Bahasa Malaysia, you are most welcome.

Create the impact, create the force. We need not go extreme or by force, but getting more to understand his line of thought will help people realising what RPK has done, and doing for all of us, it will reach a point where BN can no longer withstand the snow ball effect.

Do it, for those who wanted to share with their Chinese spoken friends on RPK, there's another blog translating articles from RPK to Chinese.

Do hope for someone who are willing to do a Malay version.

Upset ? i bet you are . Tell me something please , you guys went to Permatang Pauh to help Anwar to win ,now that he has won , he has not uttered a word about RPK or Sheih or anything about ISA . iS there a master plan for him to keep quiet and let the soldiers rot inside ? Or your not pissed that he has not said anything. Zaid quit becoz of this. What say you Boss ? just need to know . thanks

We are very sad indeed for RPK and all other ISA detainees. We are utterly disgusted with the gomen and hold Hamid Albar responsible and fully accountable for this BIG MISTAKE! You will GO DOWN REAL BAD.

Tomorrow we Penangites who kicked out BN/Gerakan from Penang Govt will visit RPK in Kamunting. We can’t see or even hear him, but our roar outside will be like that of the Han Chiang High School Field roar during the eve of Mar GE in Penang (exagerate a bit).

Came to know of Pete, after my recent engagement with local politics. I admire his guts and intellect...above all, his sacrifices for a nation he dearly loves. To me, it will be a honor to know him. "To know him is to love him"
I believe eventually, 'Goodness will triumph over evil'.
Please Zor, if you have an opportunity, convey my concern from a friend living afar, who really cares.
Pete, Marina and family, Selamat Hari Raya and God bless.

We will NEVER Forget!

He has stood up for his Beliefs
He is Upright & Courageous
He speaks for the Rakyat!

Anwar went in for his ambitions

RPK went in for Our Ambitions

Which is why DSAI still have a perception problem amongst us?

Dear Mr Zorro.. don't be so upset with the food prepared 4 the ISA detainees.

Some mere citizen even ate siput babi for their daily meal with a lil bit salt and ketchup.

the experience is good for both teresa n petra so that they will know there are still people out there that need more sympathy than both of them.

It isn't a place for vacation after all so they should expect the worst from the beginning..

Those going to the Open Houses, please pack food away and send it to Kamunting for all the inmates

Jude, Anwar's silence is disturbing to most laymen like you and me. I am bombarded with queries that range from Anwar toying around to him being a liar. Haris and I have voiced the peoples concern thru a few of his aides and the Sec. Gen. Both of us were called in to meet Anwar together with Marina. He leveled with us on many issues. I appreciated that very much. Jude, be patient. This process is not as simple as making a cup of coffee.I appeal for some understanding. Let's look forward to some positive developments come October. OK Hey Jude....dont let me down.Cheers brother.

Being in solitary confinement and being indoctrinated and then not giving sustenance cannot be on the same parallel as the poor who are free to eek out a living.

And what right have you to infer that Pete and Teresa do not know the plight of the poor. Stop preaching and try to empathise.

Melayu Singapura and WandererAus....I will personally convey your message to Marina when I see her in Kamunting tomorrow.

Aunty Gobloking:"RPK went in for Our Ambitions". Spot on and inspiring.

Chia chin yau: super and thanks for your gesture. We hope somebody will do the malay translation....somebody please.

Thanks for the Reply , Preciate it a lot.

About the food i agree with kickdefella for not complaining about it.

pet and teressa are in custody not visiting the place.

I disagree with ISA abusement but please don't insult the food. A lot of citizens are eating that kind of food when all of u are complaining about it just becoz u know pet.

RPK n teressa kok can complain anything but plez not the food. Or they want to propose that all ISA detainees should be served with chopstick, McD or KFC.

yet I totally disagree with ISA

OCT 4, PM open house in Penang, ta pau all the food & send them to Kamunting,for all the detianees,they need to celebrate Hari Raya too.