DO DOGS IN MALAYSIA HAVE A BETTER LIFE THAN……

Tony (YewTube), Haris (Peoples Parliament) and I had prepared for the worst. A buddy had volunteered to baby-sit my notebook and I had packed a month’s supply of Norvasc. Whilst we prepared to set off for to pick up Md. Noh, Tony asked: “How about a last beer?” None objected and savored post-haste, as we had an 8:00pm date with GMI’s ANTI-ISA VIGIL in Kamunting, Taiping. 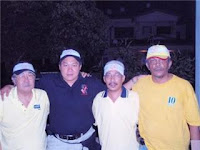 Have we been paranoid? Yes and No. YES because having participated in various “walks and vigils”, the latest security risk like the lighting of one candle can get you (Haris, that is) arrested. But definitely not for arson. NO because caution is an innate survival instinct in all of us, so we take protective caution. 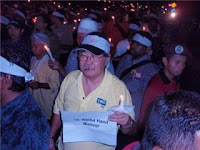 Tony had earlier at BlogHouse printed out the names of all the detainees on A4 sheets. I distributed these among our people. Mine was ABDUL HANIF MANSOR, alleged JI Member, detained since March 8, 2003. I will everyday add his name to my list in my daily prayers. 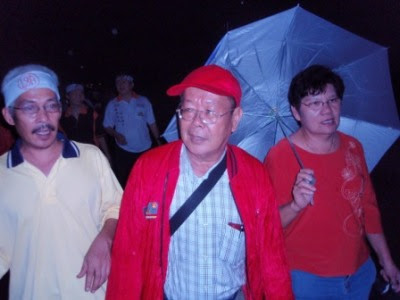 As an old Taiping boy, my companions expected me to point out where the was. I had to be upfront and tell them that I don’t know its exact location because I don’t normally visit bad places. As such we had to ask for direction. As we were about to head forward a man ran up to the car and told us that everyvbody was meeting at the Mosque. To the Mosque we went and what I saw brought back to me the catchphrase that Barak Obama, US Democratic Candidate, based his Primaries campaign on:

Gathered on the Mosque grounds “There was not a Malay Malaysian, an Indian Malaysian nor a Chinese Malaysian…..there was only anak Bangsa Malaysia, coming from all over to make a stand for our 74 brothers CAGED by an elected Government sworn in Parliament to protect its citizenry. 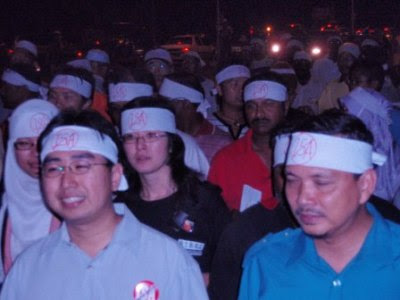 Mahatma Gandhi was in , an Englishman asked Gandhi 'Why do you Indians have different coloured skins? 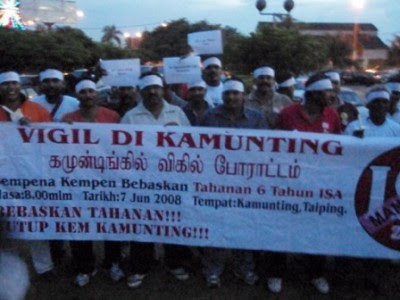 Some 350 Malaysians who marched out of the Mosque on their 3 km walk to the Detention Centre gathered force as many hesitant onlookers inspired by this show of unity and singleness of purpose joined in. The pictures featured tell their own story. 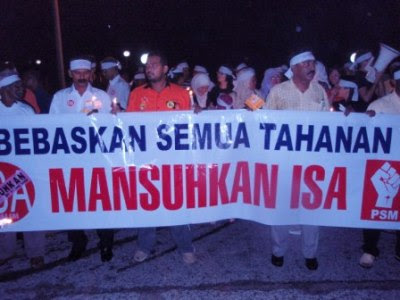 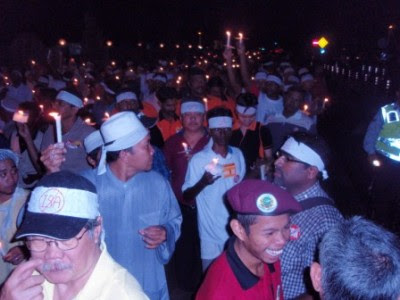 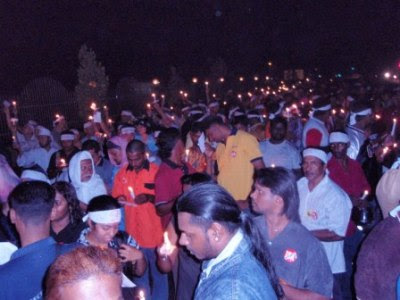 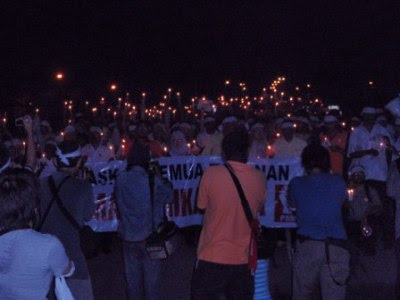 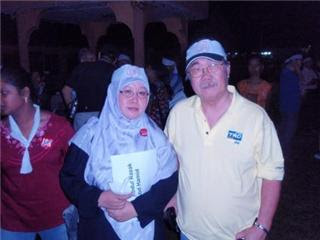 Before the march, I took the opportunity to speak to Campaign Director Norlaila Othman, whose husband MAT SAB MAT SATRAY, 45 is a detainee for six years. She spoke to me about her failed efforts to get him freed. She has no other avenue of recourse except to immerse herself in anti-ISA activism. I ask her to volunteer Mat Sab’s routine in the centre. I learnt that he is allowed only three hours out of his cell per day. The rest he spends in solitary confinement in a windowless cell.

DON’T MALAYSIANS WHO OWN DOGS TREAT THEIR DOGS BETTER WITH WELL-VENTILATED KENNELS AND SCIENCE-DIET? IS THIS HOW THE BN GOVERNMENT TREAT ITS RAKYAT. SHOULDN’T THE RAKYAT DO SOMETHING ABOUT THIS INHUMANE TREATMENT OF OUR BROTHERS WHO ARE ONLY ALLEGED TO BE TERRORISTS. PUT THEM ON TRIAL AND PROVE THAT THEY ARE GUILTY. IF THEY ARE GUILTY OF THE ALLEGED TREASON, THEN THEY DESERVE THE RIGHTFUL PUNISHMENT. IF THE GOVERNMENT DOES NOT BRING THEM TO TRIAL, THE GOVERNMENT MUST SOMEHOW BE HIDING SOMETHING FOR SOMEBODY.

Allow me to quote again from the man who crafted the ISA, Reginald H Hicklings:

"I could not imagine then that the time would come when the power of detention, carefully and deliberately interlocked with Article 149 of the Constitution, would be used against political opponents, welfare workers and others dedicated to non-violent, peaceful activities."

pics courtesy of Peoples Parliament and Malaysiakini
Posted by zorro at 5:51 PM

Happy to know that you and the guys are back from Kamunting and not being detained... haha

Beers on me at the wharf for you and the gang who took the trip, just an expression of our appreciation and gratefulness.

Great work for all Malaysians!

ISA must GO! OSA must GO! Sedition Act must GO! and all repressive acts on the Rakyat must GO! And of course they can only be abolished if BN GO so LETS KICK BN OUT!

abolish the ISA..& there will always be another guantanamo

The threat is always "terrorist" & "threats to the nation & security"

IF THAT WAS REALLY THE CASE, I think the need is more critical to ISA corrupt politicians than honest idealists!

Him smoke peace pipe with government man many summers ago but government man spoke with forked tongue. No keep promise. Can you trust the Sleeping Bull's words anymore?

Zorro, my hat off to you guys for your singlemindedness in calling for the repeal of the ISA. Truly you guys really WALK THE TALK.
CHEERS!!

I don't know, but somehow this article brought tears to my eyes.

Maybe it's because i see that Malaysians are unbreakable. The family members who never give up fighting for their loved ones who were unjustly detained.

You make my semangat membara again Zorro. Just when i feel like giving up..

Is it possible to help the prisoners escape and then to blow up the place?

But make sure no one gets hurt la. Just bomb the damn place and what it represents.

I tabik your courage in walking. All of you and the ISA detainees are in my prayers.

In my book you are a towering Malaysian! Certainly are sir!

p/s u met me when harris got picked up. Was with Edmund

Where ever Zorro leave its mark, brighter days will follow. Bravo, Zorro & friends.

when are we going for the beer at the wharf? before the price go up.

Hi Zorro, remembered... Taiping had many "firsts" in our country: 1st Railway line? 1st Museum? 1st Rest-House?1st Prison? and of course the 1st ISA detention camp? etc, etc. Maybe the Gov. says"We must all take care to preserve our national heritage !" Heritage are for posterity. Anyone who wants destroy it CAN BE ARRESTED UNDER ISA !!!!! HAHAHAH

Sathish one of the unsung hero of Hindraf. One of the 7 arrested in Penang www.olaichuvadi.blogspot.com

This article taken form www.hindraf.org . I hope they don't mind.

I've just came to know that my friend Satish who blogs in Olaichuvadi has met a serious accident on recent Monday in Kluang, Johor and he's badly injured. Immediately upon receiving the message, I called up Saras and inquired. It seems he just undergo an operation today. The operation cost is around 7K. He's from a very poor family background. I also called up his fiancee to find out how is his condition.

According to her, he's still unconscious and get ups time to time out of a sudden while screaming. He's still in the accident trauma maybe. I'm putting this on MakalVoice is for the purpose of getting some financial support for my friend Satish from generous hearted people like you.

Please donate according at your own mean and please pray to the almighty for his fast recovery. I'm going to bank in my pledge now and if can….I'll keep you guys updated on how much have been collected from time to time by getting infos from his fiancee. Thanks in advance and click the title below for more details.

BLOGGER WHO WAS AMONG THE 7 ARRESTED IN PENANG INVOLVED IN A ACCIDENT AND NEEDS HELP !!!!

Exemplary effort Zorro. Am so proud of you

Well too bad im still living with my parents and they definitely wudnt have allowed me to go.

And I think I have found the solution for Bangsa Malaysia. A child born of mix parentage of all three major races should be technically a Bangsa Malaysia child. What say you Uncle Z?

Why la you want to waste your time and energy fighting this and that. Malaysia is Malaysia la. No country is perfect la.

We should just enjoy life.

Tinesh, irrespective of whatever ethnic mix one originates from, EVERYONE BORN IN MALAYSIA IS AN ANAK BANGSA MALAYSIA AND NOBODY, NOT EVEN THE KING CAN TAKE THIS BIRTHRIGHT AWAY FROM YOU AND YOU SHOULD DEFEND THIS RIGHT TO YOUR DEATH.

aNON 10:02. It is my own time I am wasting and not yours. If you are so good at time management go distribute your shit somewhere else. This blog needs contributions and not infantile tantrums of a pea-brain. Do yourself a favor, dont visit, as this site cannot be a positive influence.

I take this opprtunity to share and welcome you and your readers to visit yet another new-comer's blog namely, www.mindnoevil.blogspot.com

Indeed this Brigedier General Dato' has his pulse on-the-spot. Pray we get more honest men and women like him step forward.

Perhaps you and your fellow blogers will share this new site with more readers.

I really hope the king comes out soon & makes a clear stand against UMNO & also one of lack in confidence, dissapointment in the way they have run the country & all the crimes & corruption of their time in power.

We must make them pay to have any real precedents in this country.

In China, they shoot corrupt officials that have been proven guilty!

A really long jail term would be better for the UMNO thieves!

The whole world is looking at laughing us. The situation is critical! PR you don’t want to take over a Malaysia that has been sucked dry, especially at the last minute. Do it now, the nations resources & reserves are being drained dry!

Tony (YewTube), Haris (Peoples Parliament) and I had prepared for the worst. A buddy had volunteered to baby-sit my notebook and I had packed a month’s supply of Norvasc. Whilst we prepared to set off for Ipoh to pick up Md. Noh, Tony asked: “How about a last beer?” None objected and savored post-haste, as we had an 8:00pm date with GMI’s ANTI-ISA VIGIL in Kamunting, Taiping.

Is HARIS too WAS ON that 'last round of BEER'? Cos you seem to put it that way. Surely a MAN OF DIGNITY such as you, Zorro; would had NO PROBLEM answering this one little question, right? SILENT shall means a YES to me.