LIN KOK KEONG. ARE YOU ATTEMPTING A LIE? 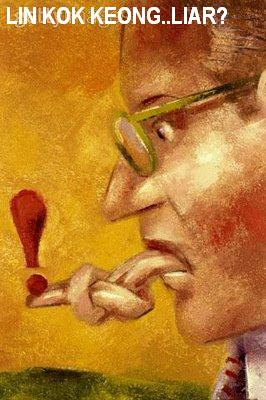 Lin Kok Keong, resides in our condominium, Puncak Nusa Kelana. By coincidence, he is also the General Manager, Planning & Development of Puncak Dana, the developer of this condominium. His organisation is the one that wants to drain our lake to put up a mall. After protesting that PD is not in compliance with Local Agenda 21, he convened a meeting with the residents. In his report to the Pengarah of Jabatan Perancangan Pembangunan he wrote (copy of letter available.):

"We would also like to stress that there has been no objection to our low-rise Community Shopping Mall except that the public have been misled into believing that we are illegally developing a so called "lake" which has been proven otherwise." (Proven otherwise by himself of course)

We definitely objected during the briefing. We have video evidence and YB Sivarasa, Subang MP was in attendance during the whole proceedings. The Malay Mail had two stories on the lake and the Star too followed with lake story. As to being misled, it is us who were misled into believing that that so called lake is not a lake but a water-logged area.

We have collected enough material to continue to fight your organisation against the development of the lake.

He ended his letter thus: As such we sincerely hope that the above matter is put to rest as it has unfairly delayed our development.

This is a lie. Since the assumed approval to develop the lake (1998), PD has not done anything. Draining of the lake began in May and fencing support were put up. WHO UNFAIRLY DELAYED YOUR DEVELOPMENT?

WE ARE GIVING YOU 48 HOURS TO RETRACT THE LIES YOU REPORTED. FAILING THIS WE WILL EXPOSE OTHER LIES THAT REMAINS DORMANT. A LITTLE BIT AT A TIME FOR EFFECT, WE PROMISE.

JUST A GENTLE REMINDER: WE DO HAVE VIDEO EVIDENCE AND EVIDENCE BY SOME NOT SO INSIGNIFICANT INDIVIDUALS THAT WERE PRESENT, LIKE OUR MP, ADUN AND REPRESENTATIVES FROM APPAC and CAHC.
++++++++++
UPDATED AT 11:56PM ON LAKE ISSUE:

Hantu overheard this conversation between a reporter and a resident on this lake issue. Reporter said that he/she has to be guarded when writing his/her story on the lake as the developer advertises a lot in his/her print media. Bet you the reporter was advised by his/her editor before being assigned to do this story. No prize for guessing which paper we are referring to here. The same paper I challenged to do a story after MM did two.
SO IT IS MONEY THAT IS MORE IMPORTANT THAN THE TRUTH.
BUT I DONT RECALL READING THIS AS THE MISSION STATEMENT OF THIS SMS.
Posted by zorro at 6:42 PM

If you have these bastards by the short and curlies, pull hard and long till they scream and come begging for redemption.

Go for it. The People are with you and the other condo residents.

This fella is a BIG LIAR! this was the same bloke who promised on behalf of PD to get some fund for ramps to be built at lift lobbies. its been years now but do i see any accessible ramps to the lift, to the pool, and to the cafe? HELL NO, Keong Lin. you sucks, man.

The guy Lin Kok Keong is talking cock through his backside, so better give him a good old hefty kick in the arse.

With all the right minded Kelana Jaya residents united on this issue success will be assured.

Fight the good fight Zorro together with the good people of Malaysia everywhere.

Wow, public humiliation. Along with his home address that he lives in with his family.
Probably the best way to get something moving here in Malaysia.

Cant say i agree with the means though. Maybe the end justifies it

Developer has been partying with gomen officer to rape our land.

No morale at all!

See?,
Such bastards think money, money, and more money comes first. I bet the fuel rise did not even cause him to flinch an inch!
During the weekend, I met some 'RICH' fellow, you know, the type that drive a Harrier etc... said that the fuel price should go higher instead! This couple are Fat and accompained by 3 Fat kids!
These are the people that we need to drag out to be hung dried!
(Sun Teowed!)

Can you post his photo(Lin Kok Keong @ The Snake)and his unit number in your blog so that all of us can know of the "Snake" that is living within our community.

As a GM,Planning & Development of Puncak Dana, and a fellow-resident, he should be helping us make our condo a better place to live rather than destorying the environment and ambience with his money-making projects.

Let us smoke out the snake.

We are behind you

Tony.....in stages like I promise....a little bit at a time for effect. Tks for the support....we all need this.When we go for the signature campaign, get as many as possible from your block....that is if you are a resident here.

Uncle Bernard,
Need a witness - I will be there as I was there that morning. We heard the voice of the residents in protest!

Maybe KK Lin no speaking ENGLAND la...that meeting was in English mah. But he certainly was not too happy that morning with our questions and wanted to wrap up fast!