GOOD PR, BUT DO SOMETHING TO SAVE OUR LAKE! 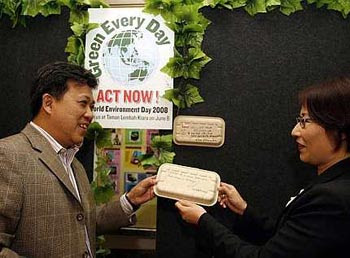 Towards a clean and green environment

SELANGOR is set to be the most environment-friendly state in the country if it is able to achieve its clean and green agenda.

For a start, the state government will require all new developments to have at least two hectares of recreational area per 1,000 people.

According to state Environment, Tourism and Consumer Affairs Committee chairman Elizabeth Wong, this guideline is mandatory in the National Physical Plan but is currently not in force in Selangor.........

CONGRATULATIONS...good initiative. I just hope it does not remain an initiative with "a lot of sound and fury, signifying nothing" (apologies to Willy Shakespeare).

How about this? Malay Mail ran another story on the Puncak Nusa Kelana Lake today, right after yesterdays article on the same subject. I call this a sustained effort.

A mall has been proposed to replace the lake opposite Puncak Nusa Kelana Condominiums along Jalan PJU1A/48, be beautified and upgraded into a rest and recreational location that would benefit the community.

Puncak Nusa Kelana Owners and Residents’ Association (PNKORA) president Sudesh Ratnarajah, 35, told Malay Mail the beautiful lake was badly maintained by land-owner, Yayasan Selangor, and as a result, the lakeside has become a dumping ground for other contractors and is overgrown with weeds.

A visit by Malay Mail to on Wednesday revealed the lakeside to be in neglected condition with batches of overgrown wild plants and weeds; and sections that are dried and cracked.

A large pile of wood chippings was also dumped there.

“The economic gains of the proposed development as envisaged by the developer may be offset by the environmental quality gains if the lake is upgraded to a rest, recreational and sporting area,” Sudesh said, in which he maintained, “there has been no upkeep by either the owner (Yayasan Selangor) or by Petaling Jaya council”.

Our Adun (Kota Damansara) Dr Nasir has already visited the lake and has communicated with MBPJ, resulting from which the Developer Puncak Dana finally made a presentation to the residents last Saturday. However, none of the residents were in agreement about a "community" mall replacing the lake. Present at this meeting were YB Sivaras (our MP for Subang) and Tengku Naz, President CACHC.

YB Elizabeth Wong has been in contact and would be meeting MBPJ officials early next week. Until then we just keep our fingers crossed.

Uncle Bernard,
There will be NO Community Mall, or whatever Mall at that lake! We will fight for an upgraded Park at that lake!

With you guys all the way!