ADMIT IT, KAK ENDON CAME TO YOU IN YOUR DREAM AND SAID: "REPEAL THE ISA AND THE PEOPLE WILL LET YOU STAY."

As early as in 1989, he wrote in a law journal, "I could not imagine then that the time would come when the power of detention, carefully and deliberately interlocked with Article 149 of the Constitution, would be used against political opponents, welfare workers and others dedicated to non-violent, peaceful activities."

In an interview in July 2006 before he celebrated his 86th birthday in Kuala Lumpur in August 2006:he opined that "Organised violence" was the key to the preamble of the ISA and that he had drafted it to detain communist insurgents without trial, but in later years, he emphasized, "a lot of people were being arrested who had nothing to do with organised violence (communist insurgencies) at all." 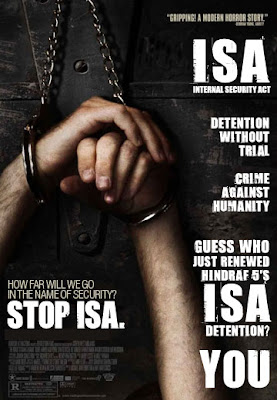 That does say a lot innit? Simply put, you go in when they think (yes, just merely surmise) that you are a THORN IN THE FLESH. The most recent, of course, being Raja who was pricking not only some conscience and in extension some sensitive hides. The Government did not have the technocratic knack to handle the Hindraf 5 who literally shamed the BN government in the global arena, of course with much help from the stuttering Minister of Information then. Oh many sensitive hides were pricked and bruised so IN they went. 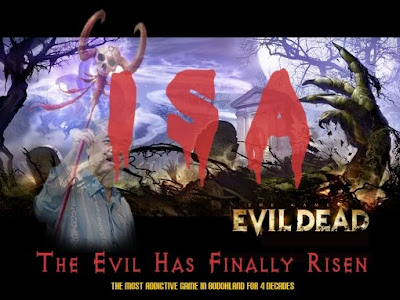 I have this nagging feeling that the PM cat-naps during the day because his nights are always troubled by nightmarish dreams such as the ones where it is reported by a friendly bomoh, his late wife’s repeated visits chides him over his prevailing indiscretions, ISA-wise. He has to exorcise the ISA demons and I can’t imagine what Kak Endon is conjuring, besides visiting him in his dreams, to save him. I am quite convinced that he will be finally exorcised if he repeals the ISA. He would be a hero then and probably will be allowed to stand rather than step down. Think about it sir, and seriously.

Oh yes I will be at the Vigil on Saturday with Haris and YewTube Tony after picking up Noh in . We are answering this Kamunting Vigil appeal:

- Kamunting Detention Camp in Taiping is expected to receive visitors numbering thousands in a campaign against the inhumane Internal Security Act (ISA).

It is a continuation of the ongoing Abolish ISA Movement (GMI) campaign programmes namely the letter signing marathon, online petitions and postcard campaign which was launched by the body last April.

GMI chairman Syed Ibrahim Syed Noh said the campaign which is organised by Perak GMI with the cooperation of federal GMI is scheduled to start at 8pm on June 7 in front of the camp.

"The camp is the symbol that oppression is being sanctioned, and at one time had housed thousands who were not given trial or found guilty in court, he said in a press conference at the Chinese Assembly Hall on May 29.

"GMI is also taking this opportunity to invite the people from the northern region namely Kedah, Perak, Pulau Pinang and Perlis and to make this campaign a success, as they might have previous campaigns were held .

GMI which is in the process of notifying the police of the programme, would not however be applying for a permit it is of the opinion the citizen's right to gather and voice out their opinion is enshrined in the constitution. - ES

Yo Zorro, The ISA must go! ISA has been used to bully the people and to keep them quiet so the leaders of past and present can do whatsoever they like with the country and behave like dictators but hopefully this will change with people like you moving on by informing and educating the country. the point is that Malaysia can be so much better and developed both as a society and economically.

living in the delusional state of unfounded threats –

that the non malays were supposedly posed –

for all the discrimination, racism and bigotry that they spawned with a very diabolic twist in the first place.


That’s the pride of unmo – screwing everyone else matters most.

Refreshments will be served!

Although I would love to see the ISA to be repealed, but your headline of the topic lacks respect for the deceased.

Though we may be passionate about the things which we fight for, please do so in a professional manner.

This is a good example why we can't have 100% freedom for the media.

Another take on ISA. Why we might need it after all?

Just imagine Barisan Nasional falls because of crossovers. Pakatan will certainly find its hands full with all these UMNO types causeing all kinds of problems.

Now, for far less threat to the security and stability of the country, the BN government has sent people to Kamunting.

Don't you reckon applying the same standards Kamunting will very quickly fill up with a lot of UMNO types? And mind you, they can't complain too. After all they should know that they were more threatening to the nation then any of the others who are there now.

I have to remain the ultimate optimist and believet hat Pakatan is taking over soon. In which case, over the transition I think Kamunting will do nicely for the likes of Badawi, Najib, Khairy, Mahathir, Samy Velu, Badaruddin, Nazri (hey whatever happened to this guy? Have not hear of him recently) and of course Mohammad Mohammad Taib.

Well, I am sure you won't object to these guys spending some time together in Kamunting would you, Zorro?

Crower, point taken but not necessarily agreed upon. I know the deceased personally. I have given her the respect she deserved. I know the type of person she is. If she had not been ill (which she was, when PM took charge of the country) she would have been a pillar of strength and a minder to the PM. She could not and she was away most of the time and a lot were kept away from her.YOU are not privy to this. I WAS. Now, she has gone and we live day to day. Can you guess what she is thinking now, from where she is? You think those dreams are not possible? The dead do wonderful things,if you must know.
You saw disrespect in my title. I focus on reality. Your definition of being professional differs from mine in the context of what we do...me a commentator and you a legal advisor. You work is application, mine is probing. I will not, because it is unfair to, ask you to accept my definition of my take on professionalism.
You said you love to see the repeal of the ISA.That's good, but wishful thinking ain't getting us nowhere. I would engage gears, step on it and GO....see the process thru. Even if my small effort failed, I can say I TRIED, despite mumblings of disrespect for the deceased. Lets move forward...a bit of brake, but no reverse gear.PEACE young man.

No Old Fart, by the time your choiced inmates are indicted, Kamunting would be no more. A special VIP wing for these BN guys are being fitted at in Sungei Bulong along Jalan Harapan. Hantu informs me that some top-flight interior designer from Rwanda is working out on the accoutrements for the cells befitting our inmates.

you said that "This is a good example why we can't have 100% freedom for the media."


There is no good reason for not having a free press which is the fundamental pillar for a progressive civil society.

freedom of speech is the freedom of expression and an intrinsic of basic human rights in the aspiration of modern society and true democracy.

Always a pleasure to read your blog. I am very much with you on this matter. The ISA has to go . No two ways about it.There can be no detention without trial. Free them or charge them I say.

I don't wish to be disrespectful to Kak Endon..but I don't think he remembers her anymore.

Otherwise he will not be so irresponsible towards the rakyat.

I hope and I pray
That something good will come of this day
In a land where the good are locked away
And the evil ones are freed on what tainted judges say
While those with no proven guilt in prisons stay
For what they bravely do or say.

I have always respected you for your noble human rights causes, but when you out-of-the-blue single handedly ( probably to get female support) link the ISA to AAB's deceased wife then your apparent gallantry becomes suspect and there you go again on another lost meandering course ! Like a stoned fella still on a hangover mode. Hey wake up , the ISA has nothing at all to do with this sleepy head ! Nex time you should end your fine tactical strike with a exploding crescendo not a AAB-dozing whimper !

Anon 10:38am....I resent your "probably to get female support" assumption and sermonising about "a stoned fella still on a hangover mode". You cant afford to buy my malts.So shut up....and can you just take a flying fuck to wherever can take your gutless anonymity...you said: Hey wake up, the ISA has nothing at all to do with this sleepy head!" Dang man, this is a revelation to me...whose signature sends people into the ISA? Who should wake up?.... and unless you don't get the message, let me make it simpler and not meander: you are not welcome in this blog....cant make it any simpler boy!

ISA
The fear of the people
Under its arm there is no trial
A person can sit it out for 2 years initially
It can be extended at the whim of Prime Minister
Through his Home Affairs Minister…………..

I will support the total ban on ISA
In our country we don’t need it any more
We have enough other laws to detain trouble makers
Under the Police Act there are grounds to persecute offenders
At least these people will know what they have been charged
And they can prepare to defend for their honor….