PARDON ME, I AM JUST A BLOGGER, NOT A JOURNALIST! 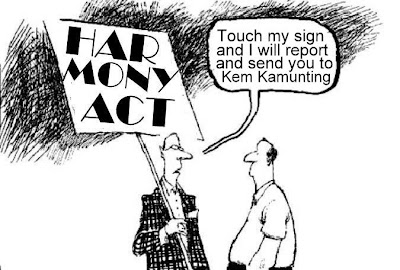 I am no journalist, endowed with the license to spin. I am just an unsalaried blogger who gives it straight to you and from the heart.

I will tell you that the Harmony Act is some utopia conjured by the fuckheads in Putrajaya. That utopia is distorted harmony.

I will tell you that Custom Officer Ahmad Sarbini Mohd also was alleged to have lost his balance and“fallen” to his death from enhanced interrogation from the new MACC building in Jalan Cochrane, after bothersome truthfinding audits whilst the RCI on TBH was in progress.

I will tell you that since intimidating coaxing and intensified physical techniques failed Kugan succumbed to possible heightened body reconfiguration ultimate and rigorous phenomenological exercises!

I will tell you that Putrajaya will swear that they will not lie but instead will use euphemism like the boy who told the mother that since he had some time to spare, he did some creative economics and boosted his energy level for a while. I will tell you that the kid meant that he ponteng classes, stole some money and blew it on cigarettes.

I will tell you that more euphemisms will come out from the Transformation Department because “chocking” the chicken or “porking” the pig is better spoken/written than seen.

But I will also tell you that the Peaceful Assembly Act and the Evidence Act and whatever invasive imploration analysis forthcoming from the jackasses in Putridjaya will garner more votes for Pakatan.

This much I can tell you

These are the last days of the multi-head Hendra. Expect the worst and be prepared for it. The righteous will grind and pulverise the BN morons into dust.

Malaysia and Malaysians must be saved from obliteration from these evildoers.

Rock them to their bones, Zorro!

Keep up the Boycott of Petronas, Petron.......and anything slightly associated with UMNO....like NAZA, Astro, Berjaya, Sports toto, Maxis.......or use their stuff less....

Boycotting the Petrol of UMNO will make them suffer more!!

Aiyah, Bernard, by now, you know, I know that UMNO, MACC and PDRM are truly ornithological specimens of similar plummage congregate in such close promimity.

Najib is too weak to regulate money politics and get all his “transformation” agenda implemented and just like Abdullah he is facing a lot of resistance from within his party. It looks like toothless Najib has to emulate Mahathir’s approach in politics for fear that he will be vetoed by the latter.

The perception is money politics has stippled UMNO and the country’s politics will be riddled with corruption for decades to come if UMNO is still chosen to helm the country. The conviction is that when politics and business are compounded it breeds corruption. Seemingly, UMNO will keep on breeding corrupt leaders who are in politics to make money for themselves.

locations from the federal budget of 2010, 2011 and 2012 have shown that the government is more interested in using the police to maintain power than to fight crime.

In the context of the heightened crime situation across the nation, it is high time that we examine the priorities of the police through the budgetary arrangements.

We Ka Siong dedicated these two Jacky Cheung's songs to Moohideen as MCA is waiting too long for the approval of Kuantan independent schools: 等你等到我心痛 & 我等到花儿也谢了

We Ka Siong can dedicate not just Jacky Cheung's songs or a high definition DVD of CSL's sexual exploit to Mooheedin as the UMNOputras who are obsessed with sex for all I care, but it remains to be seen what scraps he will get as this the GE season.

The cluless Malay first Mooheedin and his boss might promise the moon just to get the Chinese votes but it would be Chinese bashing after the elections.

These dimwits in MCA never learn. We Ka Siong is sucking up to the Malay first DPM to score some brownie points to promote himself as a winnable candidate when the whole nation especially the Chinese know what a shitload of leaders the MCA fellows are.

The MCA towkays like their counterpart in the MIC which has only produced incorrigible mandores with a penchant for ass licking.

All these parasites will know how much the Malaysians loathe them during the 13th GE.

If Najib feels that he has conned the rakyat with all his half-hearted attempts at transformation is going to give him a phenomenal win in the 13th GE, he should muster some courage to call for elections NOW.

If he does that he would be signing his own political demise. The 13th GE results would make all the warlords to rise up against him and his cousin and throw them where they belong - the filthy garbage dump.

His dream of igniting chaos in the country in the event he loses will be just a pipe dream. Not everyone wants to see disharmony, mayhem and death just to keep him in power.

This is the video depicting the real event that the PDRM is trying to counter with their delayed version: