THIS IS NOT SARAWAK, USE THE BACK DOOR, LIKE IN ALL YOUR DEALINGS! 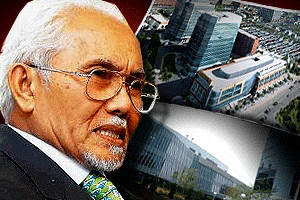 The protest certainly denied Taib his grand entrance. He had been due to arrive in style, greeted by the University’s Vice Chancellor (the sponsorship must have been huge) to give the opening speech for the two-day conference, but he ended up being sneaked in past the protesters and ushered in through the back of the building. A break-away group who spotted his entry surrounded his car and waived their banners in disgust.

Panic and concern was soon evident amongst the organisers, who called the police and sent an army of Special Branch officers to photograph the protesters, who were banned from entering the building by anxious bouncers. (University hire bouncers? Ruddy bloody ridiculous,if I might say so, gov!)[Parenthesis mine]The School, clearly taking no risks, had hired a phalanx of extra personnel to protect their awkward guest and to block entry to the clearly highly-respectable gathering of locals and some Malaysians who had come to explain to Oxford exactly what they were dealing with. Many reminded the organisers that the criminals were the ones inside, while the people outside were lawfully making a very valid protest.

READ HERE WHAT TRANSPIRED INSIDE AND OUTSIDE THE OXFORD’S SAID BUSINESS SHOOL AQUARIUM.

Your PR is also no angel la. Look at the Star today la about that DAP rep.

In all honesty, both sides tak boleh pakai one.

"Panic and concern was soon evident amongst the organisers, who called the police and sent an army of Special Branch officers to photograph the protesters, who were banned from entering the building by anxious bouncers. (University hire bouncers? Ruddy bloody ridiculous,if I might say so, gov!)[Parenthesis mine]"

They are showing the British this is how they do things in Malaysia!

So, British and foreigners see for yourselves. The victims do not lie.

If an Institution like Oxford University likes to be perceived as having links with this politician, then the historical esteem of the Institution is as good as having been flushed like what you would do after having gone to the toilet. It stinks and stink badly with such a foul odour that even the Medical faculty of the University would not be able to extinguish the termite.
malsia1206

What was Oxford thinking when they play ball with this guy?

But come to think of it, they could just be birds of the same feathers ... same mindsets, different countries ... that's all.

Not all learned people have the same values.

If Jibby could spend our money for an Op-Ed on Washing-ton Post and the forgettable meeting with Obama while Rosie the Posie's face could be splattered on US dailies for a million, I suspect this backdoor CM and tyccon could also pay millions to secure a talk in Oxford.

Money buys things definitely not dignity. With more MNC acceding to their customer's growing conscience (Fair Trade and all), it is no rocket science to explain why our FDI plunged the lowest in this region.

Wishing you a pleasant day Sir..

Anon1114am....show me any writing of mine where I say that Pakatan is without blemish. Don't shoot your mouth if you have nothing worthwhile to say in this blog.

if we hv reasons to suspect the dap fler, report him/her straight to the macc and police.

pakatan is not umno. that means pakatan should be of higher standards.

That's it! That's it Tuan Zorro,

Zorro, is it worth the trouble to feed these faceless, thick-skinned, professional trolls?

Sam Sung, its OK, they are denuding and exposing themselves shamelessly.

PKR and DAP will be shown the back-door during the coming Sarawak state election.
That is why Uncle Zorro is using the back-door to hit at Taib Mahmood.
Or is he learning from his master who loves the back-side?

Old habits die hard!...once you are a dubious character, always uses the back/side doors, it becomes a second nature to this scumbag!
Malu lah, after 3 decades of screwing the Penan peolple, where got muka lagi....
If beaten in the poll, he will use the back door and vamoose in his private jet to timbaktu!!!
No tears for this asshole and his kinds......

Please show me ONE ... ONLY ONE of your article where you whack PR reps.

To show you how stupid you are here is one that's posted sometime ago:

....and to prove to you that you are more than stupid here are some very recent ones:

Friday, June 25, 2010
I AM NOT VERY ANGRY....JUST VERY DISGUSTED.
http://zorro-zorro-unmasked.blogspot.com/2010/06/i-am-not-very-angryjust-very-disgusted.html


Saturday, June 26, 2010
BREASTFEEDING IS HEALTHY BUT NOT IN POLITICS.
http://zorro-zorro-unmasked.blogspot.com/2010/06/breastfeeding-is-healthy-but-not-in.html

Maybe I am too harsh labeling you stupid....ignorant would be a better choice....

I just hope you are intelligent enough to go to those postings above. But have fun reading me bashing PKR.